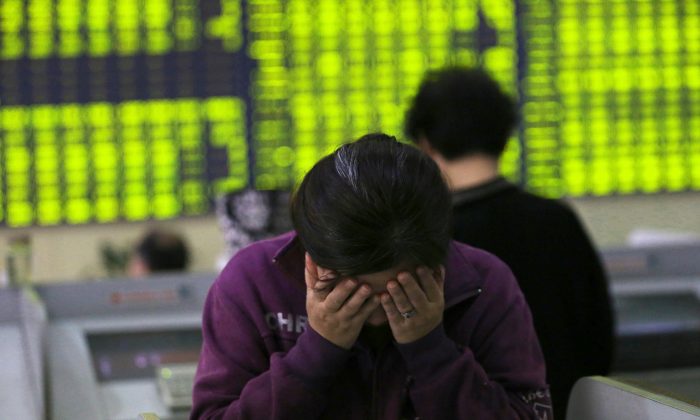 A woman rubs her face as she stands at a computer terminal in a stock brokerage house in Nantong in eastern China's Jiangsu Province, on July 8, 2015. (Chinatopix via AP)
Opinion

NEW YORK—The recent Shanghai market collapse and Beijing’s efforts to engineer a strong stock rally to reverse it have had quite limited effects on Western markets. Going forward, however, the fallout from the Chinese government’s market meddling will likely be less benign.

Unlike Western corporations, Chinese businesses are much more dependent on bank financing than selling stock to raise capital. And ordinary Chinese workers have more of their savings in banks and less in equities than Americans.

Chinese banks are predominantly state owned, and funding for projects too often reflects the goals of the State Council—a political body that’s analogous to a Western government’s cabinet, but that also sets broad monetary, fiscal, and industrial policy goals.

Hence, a lot Chinese savings are badly invested. For example, hundreds of billions of yuan has been poured into financing joint ventures between Chinese and Western automakers—yet indigenous Chinese manufacturers still have not learned how to produce a vehicle reliable enough to export and compete in global markets.

To expand the pool of equity capital and wean businesses from bank financing, Beijing initiated a big push to get Chinese savers to buy stocks, including with borrowed money—what we call margin trading.

The Shanghai stock market soared 60 percent the first half of this year. In June, authorities, worried things had gone too far, tried to deflate the bubble a bit by tightening credit, but instead of a small pullback, the market collapsed.

Now regulators have thrown the kitchen sink at the problem in an effort to re-inflate the market—for example, making massive loans to large brokerages and letting ordinary folks pledge real estate to maintain stock positions—and these efforts have had some success. Stock prices are still up 17 percent since Dec. 31.

If the State Council chooses, the People’s Bank of China can push up prices again by simply printing more money and facilitating the purchases of enough stock by state-owned banks and brokerage houses—importantly, the Shanghai exchange is still up 70 percent from a year ago.

Just about nothing in China’s financial sector is legitimate. Unlike Western central banks, the People’s Bank of China does not independently set monetary policy or regulate banks. It takes its orders from politicians on the State Council, state banks carry loans that will never be repaid by otherwise insolvent enterprises, and the yuan does not trade freely against the dollar and other currencies in foreign exchange markets.

Yet the London Metal Exchange recently announced it will accept yuan—along with the dollar, British pound, euro, and Japanese yen—as collateral from banks and brokers who trade gold and other precious metals on its platform.

Later this year, the IMF may add the yuan to those four currencies as the assets that back Special Drawing Rights—the IMF’s own international currency. That would pave the way for central banks around the world to hold large amounts of yuan as a reserve currency, and make China’s politically controlled state banks as legitimate and potentially powerful in global markets as J.P. Morgan or Deutsche Bank.

Right now, the State Council, through the People’s Bank, can print as much money as it likes to hold the line and push up stock prices, and set the value of the yuan against the dollar and other currencies as it chooses.

With China’s state banks legitimatized and the yuan enjoying reserve currency status—unchecked and unchallenged—Beijing will be able to blunder and plunder markets globally, and unwittingly or with pernicious purpose destabilize markets for gold, currencies, equities, and bonds.

The immediate effects on Western markets of the recent upheavals in the Chinese stock market may be limited for now. But if left unchecked, Chinese economic power will become a genuine threat to global financial stability.