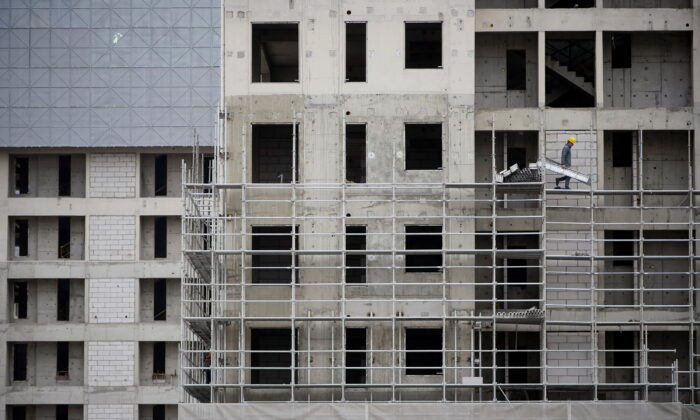 A worker walks on scaffolding at a construction site in Shanghai, on Jan. 14, 2022. (Aly Song/Reuters)
China Business & Economy

Average new home prices in 70 major cities were unchanged on a month-on-month basis for the second time in a row, according to Reuters calculations based on March data from the National Bureau of Statistics (NBS).

On a year-on-year basis, new home prices rose 1.5 percent, the slowest pace since November 2015, and easing from a 2.0 percent gain in February.

Over 60 cities have eased curbs on home purchases to support the ailing property market, after an official campaign to reduce developers’ high debt levels pushed the sector into a deep chill in the second half of 2021.

Banks in over 100 Chinese cities have lowered mortgage rates by around 20 to 60 basis points since March, central bank official Zou Lan said on Thursday.

But a surge in cases of the highly transmissible Omicron variant and harsh virus lockdown measures have again cooled demand in many cities.

In tier-one cities, prices gained 0.4 percent on month, narrowing from a 0.5 percent rise in February, while growth in tier-two cities was zero.

“The growth slowdown in first-tier cities in March was mainly due to the impact of the COVID pandemic, indicating weaker market expectations,” said analyst Xu Xiaole at Beike Research Institute.

More cities are likely to relax property curbs in the near future, and demand will be gradually released, said Xu.

The property market in the commercial hub of Shanghai slowed with home prices rising at the slowest pace in four months, at 0.3 percent month-on-month.

Shanghai is in the midst of China’s worst outbreak since the virus emerged in Wuhan in late 2019, reporting more than 20,000 cases daily amid an unprecedented citywide lockdown. Dozens more cities are in partial or full lockdown.

“The growth in new home prices in Shanghai will further ease in April,” Lu added.

Analysts are unsure if interest rate cuts would quickly reverse the slump as long as the Chinese regime maintains its zero tolerance COVID-19 policy.

In the first 12 days of April, new home sales by volume in 30 cities surveyed by Wind were down 55.6 percent year-on-year, analysts at Nomura said in a client note on Wednesday.