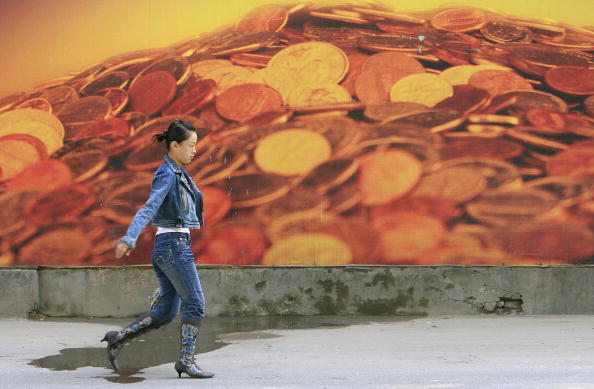 According to a recently released report, 86.6 percent of China's 175 million people born between 1990 and 1999 have overdue debts or debts that need to be paid in installments, while only 13.4 percent are debt-free. (FREDERIC J. BROWN/AFP/Getty Images)
Social Issues

China’s one-child policy has had an unexpected side-effect: the children were indulged by their families and have grown into young adults who spend lavishly even if they don’t have the means to repay the debts they are accumulating. One commentator says it’s a social disease and a direct result of growing up under the Chinese Communist Party’s (CCP) authoritarian system.

According to a recently released report, 86.6 percent of China’s 175 million adults born between 1990 and 1999 have overdue debts or debts that need to be paid in installments, while only 13.4 percent are debt-free.

On Oct. 26, Bank Of China Consumer Finance Company and Datagoo jointly released the “Contemporary Youth Consumption Report.” In addition to the above data, the report also found that debt incurred by the post-90s generation accounted for about 49.3 percent of total consumer loans. In terms of consumption structure, more than 60 percent of this age group borrows money to improve quality of life and for leisure activities.

According to the report, the post-90s generation’s consumption attitude is very different from that of their parents.’ In their opinion, consumption means to experiencing and pursuing a better quality of life. Compared with the older generation, they are willing to invest more in their hobbies, and this mindset was facilitated by the birth and boom of internet financial products.

Lazy economy includes products that provide comfort and time for people. The size of this economy exceeded $15 billion in 2020, with the fastest growth of this group being in those born after 1990. “Lazy man’s products” include shoe-washing machines, breakfast making machines, and egg cookers.

Pet economy: The post-90s generation accounts for almost half of all cat and dog owners in China. The online pet-related spending by the post-1995 generation has increased dramatically for three consecutive years.

Regimen is usually a passion of the elderly, but now young people are also taking it up. The report predicts that the proportion of exercise consumption among young Chinese in 2021 will increase by 7.5 percent compared with 2020.

Beauty economy: Fifty-two percent of female cosmetic consumers on Chinese online shopping platform Xiaohongshu are under 22. Among all age groups, people aged 18 and under are particularly interested in beauty products.

Entertainment industry: The most popular form of entertainment in 2021 is murder mystery games. Its market size in China is expected to exceed $2.25 billion, with 9.41 million projected consumers, more than 70 percent of whom are young people under 30.

Traditionally, Chinese people save a lot of their money and spend little. Now, those habits seem to be reversed.

According to a research report on the “Consumption Trend of the Post-90s Generation” released by Suning Finance published in October 2019, the post-90s generation “loves to spend money and spends it fearlessly,” but doesn’t have much savings.

And according to the 2018 “China Pension Outlook Survey,” jointly released by Fidelity International and Ant Fortune, 56 percent of Chinese under 35 have not yet started saving, while 44 percent of those who have, saved an average of $200 a month.

The debt-to-income ratio of China’s post-90s generation is as high as 1,850 percent, with the average debt owed to various lenders and credit card issuers exceeding $17,433 per person, the South China Morning Post reported on Jan. 2, 2019, citing a survey conducted by HSBC.

Spoiled and Unwilling to Work Hard

The Epoch Times asked some Chinese store owners for their opinion of China’s post-90s generation. The consensus was that this generation’s pursuit of pleasure and incurring of debt is a phenomenon that reflects social problems in China. Most of them are only children. Their parents have granted them whatever they asked for, which has made them lazy and arrogant and it is difficult for them to adapt to society.

“These young people are used to enjoying themselves at home, and they’re picky when looking for a job. They despise ordinary jobs and are not willing to work if the salary is low,” a grocery store owner in Shenyang city told The Epoch Times. “It’s a habit they acquired in childhood. A family only has one child, and everything in the family centers around the child. But this isn’t how society works,” he said.

Another store owner said: “Our store once hired some of these young people. But after receiving mild criticism they’ll quit. You can’t criticize them. They freeze up when they encounter trivial setbacks. When they don’t have money to spend, they’ll borrow money through online services behind their parents’ back. It’s easy to get loans online now, but it’s hard to pay them back. There are a lot of such young people that I know of. Some families even sell their homes to help the young adult in the family repay their debts.”

Another reason why these young Chinese spend beyond their means, is a direct result of growing up under the CCP, according to Canadian writer Sheng Xue.

Sheng, who is also the Vice Chairman of the Federation for a democratic China, told the Epoch Times that the behavior of China’s post-90s generation is essentially a social disease, a disaster and tragedy created by the CCP’s authoritarian system.

China is an abnormal society, Sheng said. The CCP’s autocratic rule doesn’t allow for any freedom of expression. Especially since the 1989 Tiananmen Square student massacre, Chinese people stopped paying attention to politics, and began focusing only on money.

The Tiananmen Square Massacre was an event that caused the moral collapse of Chinese society as a whole, destroying people’s sense of right and wrong and all values. The post-90s generation grew up in this social environment. They have no way to establish correct values and basically only care about money, Sheng said. Children from ordinary families usually don’t have a lot of money to squander, so they overdraw their credit cards and borrow from financial institutions.

Kane Zhang, and Joyce Liang contributed to this report.