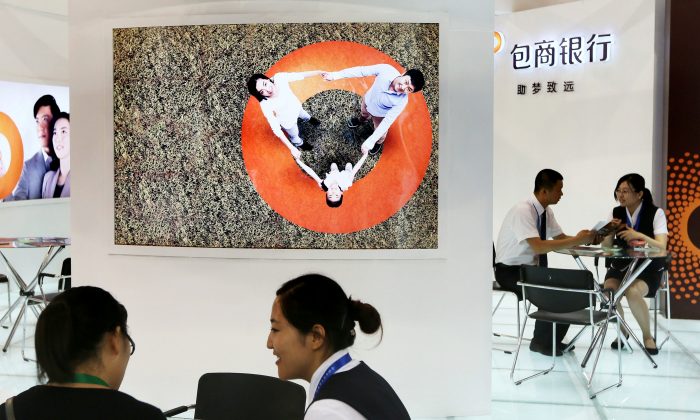 Staff members are seen at the booth of Baoshang Bank at an investment and finance fair for small and medium sized enterprises in Beijing, China on July 18, 2013. (Reuters)
By Reuters

BEIJING—China’s Huishang Bank will take over four branches of Baoshang Bank under a state-led reorganization of the Inner Mongolia-based lender, two sources told Reuters, as part of Beijing’s drive to reduce financial risks from small lenders.

Huishang will take over Baoshang’s Beijing, Shenzhen, Chengdu and Ningbo branches in a new round of asset disposals, the sources told Reuters, declining to be named ahead of formal announcements.

Earlier on Jan. 8, Anhui-based Huishang said it would acquire some assets of other banks and financial institutions, and invest up to 3.6 billion yuan ($518.56 million) to hold a stake of no more than 15 percent in a new provincial commercial bank, but gave no details.

The new bank is a part of Baoshang’s restructuring plan, two sources said, without elaborating.

Baoshang Bank became the first high-profile case of China’s small lender crisis as financial regulators took control of the lender in May last year due to “serious” credit risks, rattling domestic markets and prompting the central bank to inject cash into the banking system to prevent contagion risks.

Huishang was one of the biggest creditors of Baoshang’s interbank debts, with an unidentified loss yet to be “repaid under current laws and regulations,” the bank said in an online presentation last August.

Huishang’s total assets stood at 1.1 trillion yuan at the end of June 2019, with a non-performing loan ratio of 1.03 percent.

The People’s Bank of China said last year that 99.98 percent of Baoshang’s institutional creditors were fully repaid, and will restructure the lender as soon as possible.