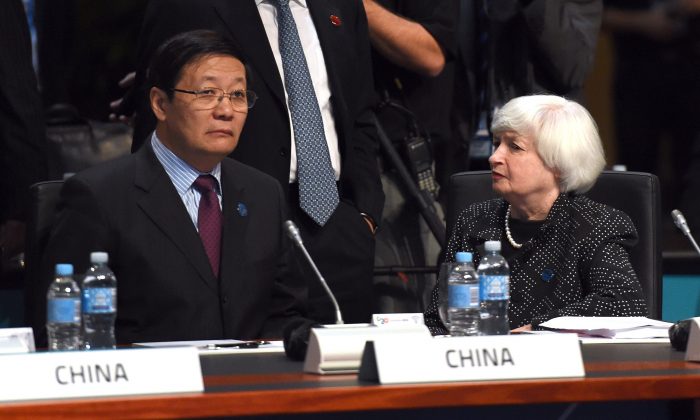 The China “hard landing” scenario has long been considered a tail risk, but not anymore.

This points to slowing economic activity in terms of reduced demand for raw materials (oil, coal, steel, cement etc.) by producers to create goods for the end user. According to Bloomberg, this statistic has been falling for 30 months.

On Sept. 13, economic worries intensified. Fixed investment growth (capital expenditures for real estate or productive capacity) decelerated to 16.5 percent, down from 17.0 percent. This economic statistic has fallen back to 2001 levels and has been on a gradual decline since 2010.

Fixed investment was responsible for 80 percent of Chinese growth over the last decade. Its slowing down is necessary to rebalance the economy in the long term, but will cause pain in the short term.

Retail sales also printed below expectations (11.9 percent vs. expectations of 12.1 percent). Industrial production fell sharply to 6.9 percent, a level not seen since the onset of the financial crisis in late 2008.

The temporary stability in China’s economy seen during the summer has faded and reality is now setting in.

As a result, growth forecasts have been revised lower, and to some extent a re-pricing of assets such as commodities and currencies, among others, have taken place.

Back in July, second-quarter Chinese GDP came in right at 7.5 percent. A Bloomberg survey of 49 economists conducted Sept. 18-23 forecasts third-quarter GDP at 7.2 percent. However, third-quarter GDP growth could well come in below 7 percent should September’s numbers follow the same trend as August’s.

But the big worry about China is that it is a key driver of global economic growth, and when its growth slows, markets worldwide feel those effects directly.

These direct effects could begin with reduced demand for commodities, reduced confidence, which impact spending and ultimately feed back to a vicious cycle of deflationary pressures and reduced growth.

The Australian dollar, for example, is closely tied to the Chinese economy. It has fallen sharply (down roughly 5 percent) in September to its lowest level since February. The Canadian dollar is more insulated from the tremors in China, but the commodity weakness has adversely affected it as well (down 2 percent) this month.

Copper is down 3 percent in September, hitting a three-month low. To put that in perspective, the metal is down about 6 percent this year. China is its biggest consumer. Copper is back at levels seen in June around the time of the first wave of Chinese stimulus measures this year.

Analysts are of the opinion that China needs to loosen monetary policy to limit downside risks from its slowing economic growth.

So it comes as no surprise that early in the week following the Sept. 13 data releases, the People’s Bank of China provided liquidity of 500 billion yuan (equivalent to U.S.$81 billion) to the five biggest Chinese banks.

While the amount isn’t particularly significant, the fact that the PBoC utilized this facility, which had seen very limited use in 2014, suggests concern on its part.

“We believe the central bank is moving towards more aggressive easing in an effort to avert a further economic slowdown in the coming months as support from previous rounds of targeted easing is diminishing more rapidly than many had expected it to,” Standard Chartered Bank said in a note to clients.