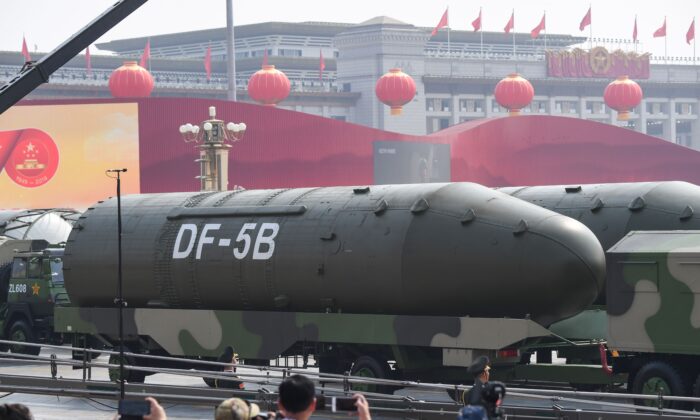 The Chinese Communist Party’s (CCP) nuclear arsenal appears to be growing at substantial levels of speed, modernization, and scale for the first time in years, analysts warn.

The number of new long-range missile silos in China has possibly exceeded 250, increasing concern from much of the free world about the CCP’s expanding nuclear capabilities.

In August, Adm. Charles Richard, the commander of the U.S. Strategic Command, which oversees the country’s nuclear arsenal, said the United States is “witnessing a strategic breakout by China,” adding that the CCP’s “explosive growth and modernization of its nuclear and conventional forces” was “breathtaking.”

Adding fuel to the fire is the recent news of China’s possible test of a nuclear-capable hypersonic missile, which U.S. disarmament ambassador Robert Wood recently admitted was something the United States was unable to defend against.

As the Chinese regime attempts to stand toe-to-toe with the United States in nuclear prowess, Walter Pincus, a Pulitzer Prize-winning journalist and contributing senior national security columnist at The Cipher Brief, said experts have become too fixated on “the game of numbers.” Some have dismissed the threat posed by Beijing by citing public estimates of its nuclear stockpile that put it at 350 warheads, still a fraction of the inventory held by the United States and Russia. But this approach, according to Pincus, distracts from a key issue: considering the implications of Beijing’s increasing nuclear abilities.

He doesn’t believe the CCP’s nuclear arsenal helps China militarily as much as it does in giving it stature domestically and abroad. “They’re showing advancements in the construction of nuclear weapons for little reason other than because their diplomatic enemies or competitors have them,” Pincus said. “It’s quite political and diplomatic, having little to do with warfighting.”

However, Michael O’Hanlon, senior fellow and director of research in foreign policy at Washington-based think tank Brookings Institution, believes that China’s growing nuclear force does confer a military advantage, particularly as it prepares itself for conflict in its quest for global domination.

Officially, the Chinese regime has long held a policy of “no first use” with respect to nuclear weapons. It also claims to have a regime to maintain a policy of minimum deterrence, requiring it to keep its nuclear stockpile to the minimum level necessary to deter nuclear threats.

But Pincus dismissed these official positions as not credible. While no first use is “a pleasant thing to think about,” he said, national security strategists and experts do not trust the Chinese regime of today. “Likewise, if the United States declared no first use,” he said, “the Chinese wouldn’t believe us either.”

The communist regime’s advancing nuclear capability could play a key role in shifting the outcome of a future war over Taiwan, according to O’Hanlon. Beijing views the self-ruled island as part of its territory to be taken by force, if necessary.

Taiwan is the CCP’s top military concern, O’Hanlon said, and the regime is becoming increasingly capable of giving the United States “a real run for their money” in this area.

O’Hanlon suggested thinking through a scenario where the United States entered into a conflict with the Chinese regime over Taiwan. “If the Chinese and Americans were to fight to a stalemate at a conventional level,” he said, “it could be plausible that whoever has nuclear dominance would be in the driver’s seat for winning the war, or at least getting the other side to back down.”

Should Beijing continue to challenge the United States’ military might in the South China Sea, then this threat may become more pronounced.

“As China gets to the point where it is conventionally on a par with the United States—not comprehensively or globally, but near—then maybe it could start to dawn on them that its nuclear arsenal could be its checkmate option, its last move,” O’Hanlon said.

By substantially ramping up its nuclear capabilities, the Chinese regime could be showing that it is not “vulnerable to the superiority of the United States in the event of military escalation,” he added.

The Deterrent Is Deteriorating

Once merely held as a strong deterrent to an escalation of conflict between nuclear superpowers, the Chinese regime is now showing the world that it is choosing to flaunt its weapons of mass destruction, the experts say.

Historically, nuclear weapons have not been used as a tactic in the course of fighting a war. The dropping of atomic bombs on the Japanese cities of Hiroshima and Nagasaki, for example, were used to end the Pacific War, Pincus noted. “They were used to kill as many people as possible and end the war, but were not used to fight the war,” he said.

O’Hanlon said, “It’s not quite as believable anymore that these are weapons of such extreme last resort, that no one would ever think of invoking them in a crisis.”

“If the Chinese were to study American strategic thinking over the years, especially during the Cold War, they would see that the United States viewed nuclear weapons as a plausible warfighting instrument,” he said.

While O’Hanlon would like to see the world move toward a direction where nuclear weapons would have “almost no utility except as a deterrent or last result,” he is not convinced the rest of the world feels the same—especially the increasingly aggressive CCP.