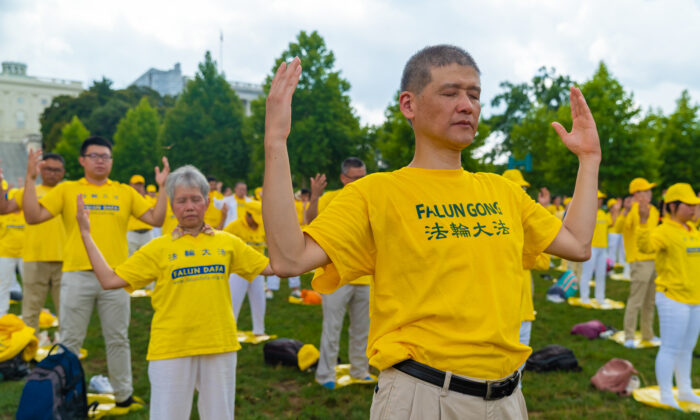 Falun Gong practitioners perform the exercises at a rally commemorating the 20th anniversary of the persecution of Falun Gong in China, on the West Lawn of Capitol Hill on July 18, 2019. (Mark Zou/The Epoch Times)
By Cathy He

The Chinese regime in 2019 sentenced 774 people for practicing their faith in Falun Gong, a spiritual practice that has been intensely persecuted by the communist regime for more than 20 years.

Falun Gong (also known as Falun Dafa), a meditative practice that includes a set of moral teachings, grew immensely popular in China in the 1990s, with official estimates placing the number of practitioners at 70 million to 100 million by the end of the decade. Threatened by its popularity, the communist regime banned the practice in 1999, deploying the state’s security apparatus to track down, arrest, and detain Falun Gong adherents.

Since then, hundreds of thousands of practitioners have been detained at labor camps, prisons, and brainwashing centers, according to the Falun Dafa Information Center. While in detention, many have endured torture as part of the regime’s efforts to force adherents into renouncing their faith.

To date, more than 4,300 deaths have been confirmed by Minghui.org, a website that serves as a clearinghouse for the persecution of Falun Gong in China. The actual number is believed to be much higher due to the difficulty of obtaining and verifying sensitive information from China.

Minghui.org published the figures in a Jan. 9 report based on Chinese court records. Human rights experts such as Freedom House believe that thousands more are held in black jails, extralegal brainwashing centers, and pretrial detention centers without formal sentencing.

The site also reported that 6,109 practitioners were arrested and 3,582 were harassed by authorities in 2019, adding that 3,400 currently remain in custody.

An influential U.S. congressional commission also recently called out Beijing for its escalating suppression of faith groups in 2019.

“Scholars and international rights groups have described religious persecution in China over the last year to be of an intensity not seen since the Cultural Revolution,” the Congressional-Executive Commission on China (CECC) said in an annual human rights report released on Jan. 8.

Over the past year, U.S. officials have repeatedly condemned the Chinese Communist Party for its widespread violations of religious freedom.

“The party demands that it alone be called God,” U.S. Secretary of State Mike Pompeo said in June 2018.

“In China, the government’s intense persecution of many faiths—Falun Gong practitioners, Christians, and Tibetan Buddhists among them—is the norm,” he said.

The Falun Gong practitioners sentenced in 2019 came from 28 provinces and municipalities, the website said, with the greatest numbers in the provinces of Shandong, Heilongjiang, and Liaoning. Prison terms ranged from four months to 13 years.

Those sentenced came from all walks of life, including accountants, engineers, doctors, executives, teachers, and retired prosecutors.

The youngest was 26-year-old media professional Zheng Feng from eastern China’s Zhejiang Province, who was given 3 1/2 years in prison for sharing information about Falun Gong with her college classmates and through social media. The oldest was 89-year-old Zhang Xinwei, from the southwestern province of Sichuan, who was sentenced to three years.

Some were handed court verdicts just days after their arrests. Others were tortured in custody and imprisoned despite serious medical conditions, the report noted. For instance, Hu Li, a 46-year-old aviation engineer, was ordered to serve a two-year term even though he was in critical condition after seven months on a hunger strike.

According to the report, authorities “violated legal procedure at every step of the prosecution process, from fabricating evidence and witness accounts to holding secret trials and blocking appeals.”

The CECC report highlighted several cases of Falun Gong practitioners or advocates representing practitioners who were imprisoned for exercising their human rights. Those examples formed part of the commission’s political prisoner database, an online portal that currently contains 1,598 cases.

Jiang Wei, a practitioner from northeastern China’s Liaoning Province, is currently serving a 12-year sentence in Liaoning Women’s Prison. In incarceration, Jiang reportedly endured abusive language, beatings, and 15 days of solitary confinement. In solitary, she was kept in a cell too small to stand in. She was also forced to eat and defecate in the cell, which was infested with flies and mosquitoes.

Middle school teacher Bian Lichao, a practitioner in the northern province of Hebei, is also currently serving a 12-year sentence. In 2014, authorities also detained Bian’s wife, daughter, and another relative, over Bian’s daughter’s attempts to visit him in prison.