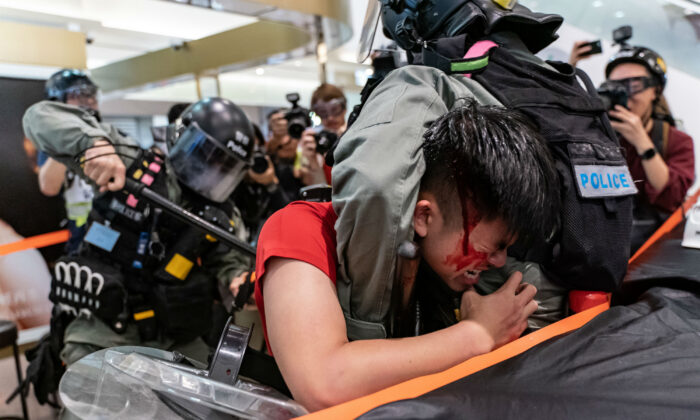 A man is detained by riot police during a demonstration in a shopping mall in Hong Kong on Dec. 28, 2019.(Photo by Anthony Kwan/Getty Images)
By Cathy He

A U.S. congressional commission led by bipartisan lawmakers has called on the Trump administration to sanction Chinese officials involved in human rights atrocities.

It also urged the United States to incorporate rights concerns in all interactions with the Chinese regime, including in trade discussions.

The recommendations formed part of an annual human rights report by the Congressional-Executive Commission (CECC) on China, released on Jan. 8. It found that human rights and the rule of law in China continued to worsen in 2019.

“Rising authoritarianism in China is one of the most important challenges of the 21st century,” Rep. Jim McGovern (D-Mass.), CECC chair, said at a press briefing on the report in Washington on Wednesday.

The 323-page report called for strong action and a whole-of-government response to counter the regime’s abuses, which includes its sustained suppression of faith groups—such as Falun Gong practitioners, Christians, and Uyghur Muslims—and labor activists; its expansion of high-tech surveillance for social control; and its political influence and censorship campaigns overseas.

For the past few decades, the Chinese regime has “expanded a costly and elaborate authoritarian system designed to intimidate, censor, and even imprison Chinese citizens for exercising their fundamental human rights,” the report said.

“People want freedom in China,” Rep. Chris Smith (R-N.J.), CECC commissioner, told NTD, an affiliate of The Epoch Times, on Wednesday. “They deserve freedom. They deserve privacy. And they deserve to be able to practice—whether it be Falun Gong or Christianity or Tibetan Buddhism or Muslims—their faith.”

The commission recommended that the administration develop talking points for U.S. officials who engage with China, including trade representatives, that “consistently link freedoms of press, speech, and association to U.S. and Chinese interests.”

“Every delegation that comes here, every interface with anybody in the Chinese government … human rights has to be on the tip of the tongue,” Smith said.

The report called for sanctions against Chinese officials responsible for human rights abuses under the Global Magnitsky Act. The federal legislation authorizes the U.S. government to punish foreign violators of human rights by freezing their U.S.-based assets and barring their entry into the country.

Last year, the United States enacted, with overwhelming support from both houses of Congress, the Hong Kong Human Rights and Democracy Act, which included provisions paving the way for sanctions against Chinese and Hong Kong officials responsible for rights abuses in the city.

Versions of a human rights bill targeting officials for atrocities committed against Muslim minorities in the northwest region of Xinjiang also passed the House and the Senate last year. McGovern said he expected a compromise bill will progress “hopefully soon” in both houses, and that he expected President Donald Trump to sign it.

To counter the Chinese regime’s influence in the United States, the USCC said the administration should heighten scrutiny of its influence operations and expand information-gathering on agents of Beijing.

At the same time, such a strategy needs to “avoid fostering an atmosphere of unfair suspicion of Chinese-Americans who are often targets of coercive political influence operations,” the report noted.

Congress should also require U.S. universities, think tanks, and other non-governmental organizations to report gifts or contributions that exceed $10,000 from foreign sources, the report said.

In response to the regime’s growing “digital authoritarianism,” the report said the United States should lead a global effort to develop a set of principles to ensure artificial intelligence development does not infringe on human rights, including the right to privacy.

The administration should also expand “global alliances” to advance human rights with like-minded countries and organizations, the CECC said. For example, it could coordinate responses when the Chinese government uses international bodies “to undermine human rights norms and closes off discussion of its failures to uphold its international obligations.”