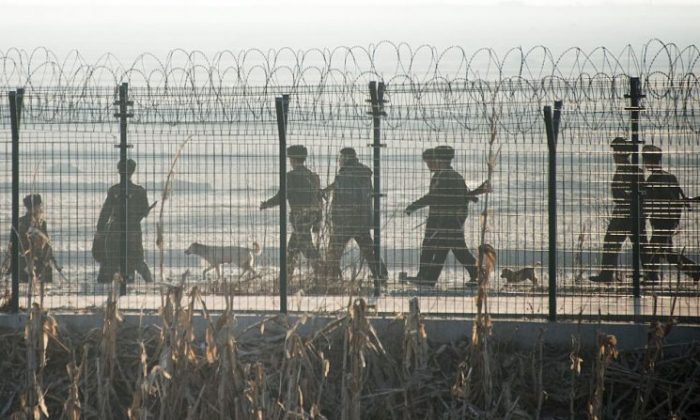 North Korean soldiers patrol next to the border fence near the town of Sinuiju across from the Chinese border town of Dandong on Feb. 10, 2016. (JOHANNES EISELE/AFP/Getty Images)
China

Tensions between the United States and North Korea have ratcheted up after the sixth and most powerful nuclear test conducted by Pyongyang on Sept. 3 prompted the United Nations Security Council to impose further sanctions last week.

Chinese banks have come under scrutiny for their role as a conduit for funds flowing to and from China‘s increasingly isolated neighbor.

The sources said banks were told to stop providing financial services to new North Korean customers and to wind down loans with existing customers, following tighter sanctions against Pyongyang by the United Nations.

The sources said lenders were asked to fully implement United Nations sanctions against North Korea and were warned of the economic losses and reputational risks if they did not do so.

Chinese banks received the document on Monday, the sources said.

China‘s central bank did not immediately respond to a request for comment.

“At present, management of North Korea-related business has become an issue of national-level politics and national security,” according to the document seen by the sources.

The document directed banks to explain to any North Korean customers that “our bank is fulfilling our international obligations and implementing United Nations sanctions against North Korea. As such, we refuse to handle any individual loans connected to North Korea.”

The document did not specify whether existing North Korean account holders could still deposit or remove money from their accounts.