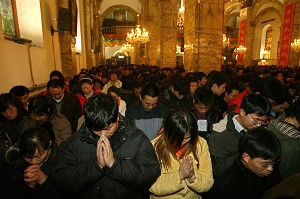 “There are fewer people than last year,” said a 30-year-old seminary student surnamed Wu as he welcomed worshippers into the 150-year-old Sheshan Cathedral, which sits atop a scenic hill about a 45 minute drive from downtown Shanghai.

“The government made sure to keep order this year,” Wu added.

May is the month Chinese Catholics celebrate the Virgin Mary, and it is the peak season for the country's faithful to visit Sheshan.

But the authorities restricted attendance this year, fearing social unrest after March's protests in Tibet and ahead of Beijing's August Olympic games, Catholic media reports said.

Tensions were heightened this year after Benedict penned a prayer that asks Chinese be allowed to freely express their faith and allegiance to him in their officially atheist country.

“Sustain all those in China, who, amid their daily trials continue to believe, to hope, to love,” the prayer says. “May they never be afraid to speak of Jesus to the world …”

Last year, around 11,000 of China's 12 million estimated Catholics visited the shrine in early May, but this year that dwindled to 5,000, the reports said, blaming roadblocks that were erected to prevent any large gatherings.

Relations between the Vatican and Beijing have hit low points several times in recent years as the Vatican criticised China for appointing bishops without papal approval. Beijing has requested that the Vatican sever relations with Taiwan, which Beijing considers a renegade province.

On Saturday, uniformed police officers and security guards stood along every step of the trail as hundreds of pilgrims climbed up to Sheshan.

Diplomatic ties between the Vatican and China were severed two years after the 1949 communist takeover, as the atheist communists do not recognize the Pope.

On Saturday, the mass at Sheshan focused not on politics, but on the deadly earthquake in Sichuan–which authorities fear may have claimed 80,000 lives or more –and also on the spiritual issues related to China's rise on the global economic stage.