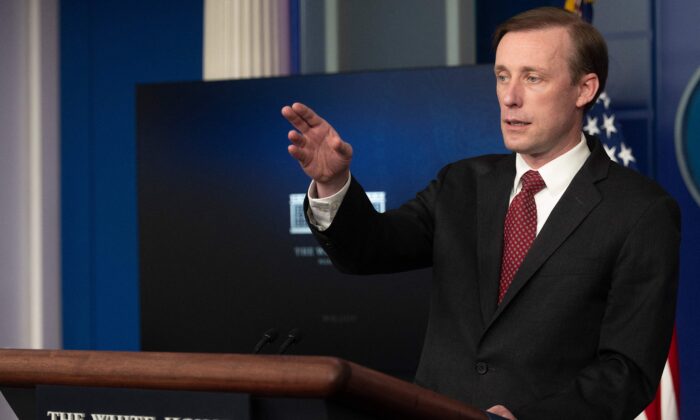 China would “end up owning” some of the costs if the regime is seen as supporting a Russian invasion of Ukraine, White House national security adviser Jake Sullivan warned on Feb. 6.

“We believe that Beijing will end up owning some of the costs of a Russian invasion of Ukraine and that they should calculate that as they consider their engagements with the Russian government over the next couple of weeks,” Sullivan told NBC’s “Meet the Press.”

The United States has threatened sanctions against Russia, targeting Russian government and military leaders, and firms in the country’s banking and financial sectors.

Those possible sanctions, Sullivan said, would “have an impact on China because they will go at the financial system of Russia, which, of course, engages the Chinese economy as well.”

The statement also joins China in Russia’s opposition to the “further enlargement of NATO.” Additionally, it claims that the two bordering nations enjoy a strong tie since “friendship between the two States has no limits” and “there are no ‘forbidden’ areas of cooperation.”

Tension between Ukraine and Russia has heightened in recent days. According to Reuters, U.S. officials said Russia has in place 70 percent of the military power it would need for a full-scale invasion of Ukraine.

In addition to more than 100,000 Russian troops at the eastern border of Ukraine, the number of Russian battalion tactical groups has increased to 83 from 60 in the past two weeks, according to Reuters.

Sullivan also told ABC’s “This Week” on Feb. 6 that he thinks China is aware that it’s “not in a position to compensate Russia for the economic losses that would come from our sanctions.”

“If Russia does choose to move forward, not only will it come at a strategic cost to Russia, but if China is seen as having supported it, it will come at some costs to China as well in the eyes of the world, in the eyes of Europe, and in the eyes of other countries who are looking on now and sending a clear message that they would prefer to see diplomacy over war,” Sullivan said.

Sullivan commented on the lengthy Sino–Russian statement while speaking to “Fox News Sunday” on Jan. 6.

He pointed out the fact that the word Ukraine is missing from the statement should suggest that “China is not so excited about cheerleading Russia on Ukraine.”

Last week, Sen. Josh Hawley (R-Mo.), in a letter to Secretary of State Antony Blinken, said the Biden administration should reconsider its commitments abroad in the face of increasing threats posed by the Chinese Communist Party (CCP) in the Indo-Pacific.

“The United States has an interest in maintaining Ukraine’s independence, sovereignty, and territorial integrity. And we should urgently deliver to Ukraine assistance it needs to defend itself against Russia’s military buildup and other threats,” the senator wrote.

“Our interest is not so strong, however, as to justify committing the United States to go to war with Russia over Ukraine’s fate. Rather, we must aid Ukraine in a manner that aligns with the American interests at stake and preserves our ability to deny Chinese hegemony in the Indo-Pacific.

“​​If China succeeds, it could harness that region’s resources to further propel its rise, while restricting U.S. access to many of the world’s most important markets,” he wrote. “We must do less in those secondary theaters in order to prioritize denying China’s hegemonic ambitions in the Indo-Pacific.”