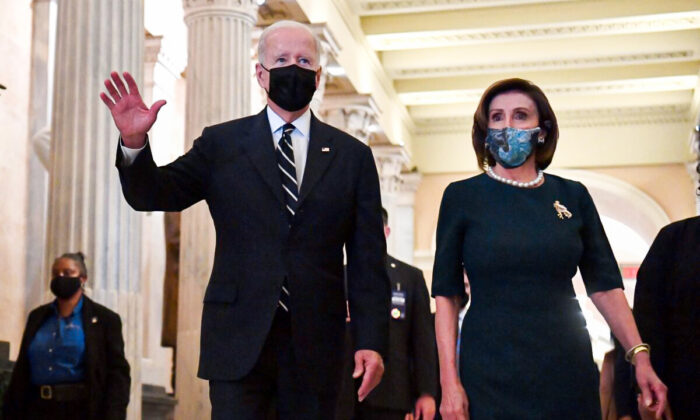 President Joe Biden and Speaker of the House Nancy Pelosi depart following a meeting with the Democratic caucus at the U.S. Capitol in Washington on Oct. 28, 2021. (Nicholas Kamm/AFP via Getty Images)
Congress

Speaker of the House Nancy Pelosi (D-Calif.) has requested an all-member briefing on the evolving Ukraine situation as fears of a potential Russian invasion ramp up.

In recent weeks, Russia has amassed over 100,000 troops on its western border with Ukraine, including infantry, tanks, and other armored vehicles, as well as sea forces. In response to this troop buildup, President Joe Biden is considering sending U.S. troops into the east European nation, setting the stage for a potentially massive war between the two superpowers.

Biden has been in negotiations with the Kremlin for weeks, but Russian President Vladimir Putin has continued his troop buildup along the Russia-Ukraine border. This precarious situation led the United States to, “out of an abundance of caution,” order the evacuation of family members of its diplomatic staff from Kyiv, while approving voluntary departure for non-essential staff. After the State Department announcement, the United Kingdom ordered the evacuation of some of its staff and envoy families.

Now, Pelosi’s request could increase Congress’s involvement in the budding crisis, and has reportedly requested an all-member briefing on the developing situation in Ukraine.

In recent decades, Congress has taken an increasingly hands-off approach to armed conflict, leaving the president and military staff to make important military decisions largely on their own. While Congress has, from time to time, granted the president use-of-force authorizations, or given opinions on military action, the modern commander-in-chief has nearly unilateral control over military affairs.

Pelosi’s request indicates that Congress may not be happy to allow this status quo to continue if the United States goes to war with Russia, and that Congress will seek a more active role in foreign policy.

Asked about Pelosi’s request, White House Press Sec. Jen Psaki told reporters, “We have been in close consultation with members in leadership from the beginning.”

“I am sure we are working to meet the request and needs of members,” Psaki added.

Though Congress has been able to agree on little over the past year, a bipartisan coalition of Democrats and Republicans have spent the past few weeks indicating support for an armed conflict with the Eurasian superpower, and several have opined on what the United States’ next steps should be in responding to Russia’s troop buildup.

One of the most popular options proposed ahead of an invasion has been increased sanctions. Though the United States has had sanctions on Russia since its takeover of the Crimean peninsula in 2014, which did little to persuade Putin to return the territory, Democrats are gathering around a far more restrictive sanctions bill.

“It is far beyond the typical sanctions we leverage,” Menendez said during an MSNBC appearance. He contended that the bill could be enough to force a Russian drawdown ahead of an invasion but urged for it to be passed before, not after, Russia invades.

“The effort here is to deter Russia from going in,” Menendez explained.

In addition, the bill would authorize around $500 million of military assistance for Ukraine, a provision in line with demands from Senate Republicans.

After Biden suggested that the United States may not take action if the Russian attack is only “a minor incursion,” Senate Majority Leader Mitch McConnell (R-Ky.) called on the president to arm Ukraine.

“I hope Vladimir Putin doesn’t misunderstand the message: No incursion into Ukraine is acceptable,” McConnell said during an appearance on Fox News.

Specifically, McConnell called on the United States to supply Ukraine with anti-tank weapons and ground-to-air missiles. “Job number one is to make sure that Ukrainians have the tools to inflict severe damage on any Russian troops coming in,” McConnell explained.

“They’re testing us to see whether we will do anything of consequence to keep them from gobbling up part of another sovereign country,” McConnell said. “That hasn’t happened since World War II. I don’t think Vladimir Putin understands sovereignty.”

The first shipment of assistance recently directed by President Biden to Ukraine arrived in Ukraine tonight. This shipment includes close to
200,000 pounds of lethal aid, including ammunition for the front line defenders of Ukraine. [1/2] pic.twitter.com/YeYanK0Px6

One lawmaker, Sen. Roger Wicker (R-Miss.) went so far to suggest that the United States should be open to a nuclear first strike on Russia if it invades Ukraine.

Wicker and other Republicans have criticized Biden for contributing to the crisis, in part through his controversial decision to withdraw U.S. troops from Afghanistan. After two decades of conflict in the faraway desert nation, Biden’s sudden withdrawal order led to the fall of the American-allied democratic government to the Taliban terrorist organization.

“What we did in Afghanistan sent an unwelcome, unwanted signal” to China and other adversaries that the United States would not defend its allies, Wicker argued during a TV appearance.