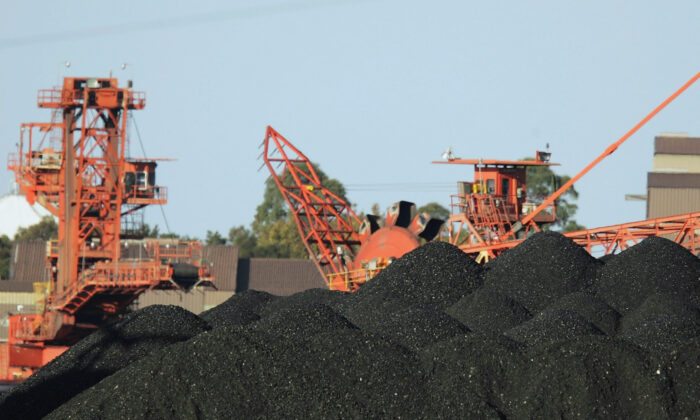 Shipments of Australian coal that have been stranded in Chinese ports for months have finally been unloaded as China grapples with an energy crisis that has seen coal and gas prices surge to new peaks.

A confluence of factors including the approaching winter months, the Chinese Communist Party’s (CCP) moves to reduce carbon emissions, COVID-19 restrictions, and its unofficial ban on Australian coal have combined to create the crisis that has manifested in sweeping blackouts that have affected China’s economic engines, the provinces of Jiangsu, Zhejiang, and Guangdong.

The CCP has reportedly scrambled to increase its thermal coal inventory ahead of the winter when demand is expected to increase for heating.

“In order to ensure the energy security of coal use in winter, power companies continue to buy more and more coal regardless of costs despite their substantial losses, and inventories continue to increase slowly,” the China Electricity Council said in a report by S&P Global.

The CCP is expected to incur “substantial losses” as it bids against Europe and the United Kingdom, who are also experiencing an energy crisis, for coal and liquified natural gas (LNG)—driving the cost of both commodities to new heights.

Despite relying heavily on gas for electricity, European power plants have also been returning to coal to meet demand as LNG prices increase.

This was both the most significant single-day price rise and the highest price level for the benchmark since it began in 2009.

“This intense competition for marginal LNG cargoes meant that bids were priced at a premium over European gas hub prices.”

In March, Australian Department of Foreign Affairs and Trade (DFAT) chief economist Jennifer Gordon said at least 40 ships of coal were stranded off the Chinese coast for “several months.” At that time, Australian coal export prices experienced an 83 percent decline due to the CCP’s coal ban.

However, despite difficulties with the coal trade, Australian exporters have long been looking to diversify its markets since the CCP’s trade war began in April 2020. As a result, increasing volumes of Australian thermal coal have made its way to India, Japan, and South Korea.

Treasurer Josh Frydenberg said Australian businesses have woken up to the fact they must diversify away from China.

“In many ways, Australia is on the frontline of this new strategic competition,” Frydenberg said on Sept. 6. “We have faced increasing pressure to compromise on our core values.”