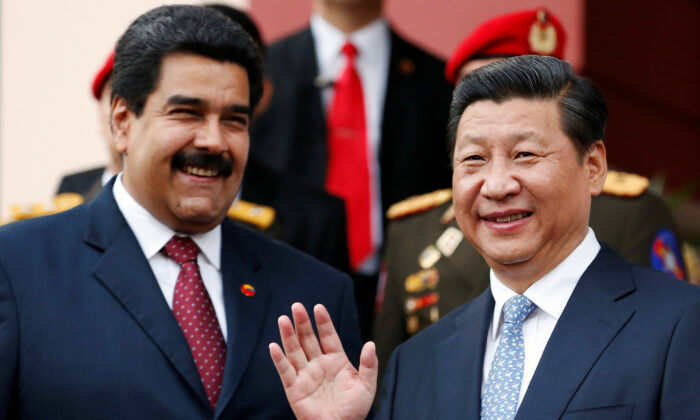 SANTA CRUZ, Bolivia—China’s reach within Latin America continued to expand in 2021, capping a 20-year trend of the Asian giant’s growth and influence through trade.

By 2035, China’s business relationships in the region are projected to more than double, which would account for more than $700 billion.

While the economic powerhouse’s expanding influence in Latin America isn’t new, the rate at which it’s happening is raising eyebrows for some experts. The United States has found itself in second place to China as the main export market for Latin America since 2010.

Much of this has been attributed to the overall lack of interest by some decision-makers within the U.S. government to develop stronger relations within the region.

“What the United States needs is a real strategy for strengthening democracy and the rule of law in Latin America and countering the malign influence of the Chinese Communist Party,” Sen. Marco Rubio (R-Fla.) said.

In an interview with The Epoch Times, regional analyst Fernando Menéndez said that as the United States spent decades focused on the Middle East, China quietly stepped onto the economic stage of the Americas and began systematically expanding its influence and power.

That’s particularly evident in Chile, which has historically been one of the strongest U.S. trade partners in the sector.

Chile’s ambassador to China, Luis Schmidt, said that while trade with other nations fell by 10 percent during the COVID-19 pandemic shut down of 2020, relations with China grew by 12 percent.

He noted that 38.2 percent of all global exports from Chile went to China in 2020 and continued to increase in 2021.

Schmidt also pointed out that Chinese investment in Chile really started to flourish in 2019, and he confirmed that the Asian nation was their country’s primary trading partner.

This kind of expansion hasn’t gone unnoticed by the U.S. Congress, which expressed concern over their communist rival’s ballooning influence in Latin America. One congressional report took special note of China’s push for military objectives within the region.

Peru Foreign Trade and Tourism Minister Roberto Sánchez also confirmed China as a primary trade partner, with business between the two countries increasing by 63 percent in the first eight months of 2021, mostly due to fishing and mining exports.

Comparatively, Peru’s relations with the United States only grew by 25 percent in 2021.

In Bolivia, China’s demand for beef exports continued skyrocketing in 2021, a trend established under the nation’s former President Evo Morales in 2019 that has continued under the current socialist regime.

The economically long-suffering Argentina surpassed Brazil as China’s primary trade partner in 2020 and saw a dramatic surge in imports from the communist nation from 2020 to 2021, amounting to a 78 percent increase.

Whilst China’s influence continues to spread through commerce, the nation inches closer to controlling both the resource and manufacturing ends of much of the world’s goods.

And with that power comes the leverage to dictate trading partners for those Latin American countries.

Rubio called Nicaragua’s severing of diplomatic ties with Taiwan in December 2021 a “disturbing development for both the United States and the entire Western Hemisphere,” indicating that it serves as a barometer for the level of power China is amassing close to U.S. borders.

And among those key manufactured goods that China sent to Latin America were COVID-19 vaccines.

In the early stages of the pandemic vaccine rollout, Central and South American countries struggled for access to immunizations, creating what’s been called “vaccine diplomacy” in the world’s less economically developed nations. China was quick to step into the limelight by selling millions of vaccines to the besieged Latin American countries.

The communist nation was among the first to roll out a vaccine program in Latin America, selling Sinovac and Sinopharm inoculations to eager governments as early as March 2021. Vaccines from the United States didn’t arrive in the region until June 2021.

One analysis showed upward of 42 percent of Chinese COVID-19 vaccines have been sent abroad, while the United States has exported only 1 percent of its own vaccines.

And the leaders of the region haven’t forgotten who came to their aid while wrestling with high case numbers and public demand for immunizations.

“We highlight the support of China and Russia, countries that helped us acquire vaccines in the fight against COVID-19,” Bolivian Foreign Minister Rogelio Mayta said in August 2021.

Mexican President Andrés Manuel López Obrador personally thanked China for its collaboration in the fight against the COVID-19 pandemic through the shipment of vaccines during a live broadcast in December 2021.

Menéndez postulated that vaccine sales from China have a very strategic aim.

“Are they trying to win friends and influence people?” he asked. “Absolutely.”