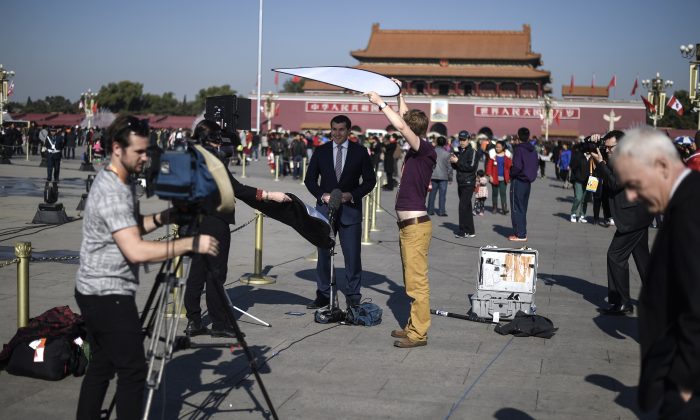 The Chinese regime has locked up the highest number of journalists in the world this year.

In its annual report, the Committee to Protect Journalists (CPJ) notes that the Chinese regime has detained 44 reporters in prisons—an all-time high in the country by CPJ records—earning it the title of “worst jailer of journalists in 2014.”

In total, 220 journalists are currently in jails around the world, just behind the record high of 232 in 2012. CPJ has been keeping tabs since 1990.

Uyghur and Tibetan journalists make up about half of those imprisoned.

Uyghur and Tibetan journalists make up about half of those imprisoned. Among the Uyghurs arrested was the outspoken professor and blogger Ilham Tohti, who was given a life sentence in September.

No Appeal for Unjust Jailing

Some of those included on CPJ’s list have been in prison for years now.

Yang Tongyan, better known as his pen name Yang Tianshui, was given a 12-year jail sentence for “subverting state authority” on May 17, 2006. He earlier contributed articles to Epoch Times.

The well-known critic of the Chinese Communist Party (CCP) was slapped with a harsh sentence because he was supposedly “elected” to be the leader of a fictional “democratic Chinese transitional government” that would replace the CCP once the Party falls. Earlier, Yang had written an article for Epoch Times in support of the political model.

Yang, who was imprisoned for 10 years for opposing the 1989 Tiananmen Square massacre, claims that he has no prior knowledge that his name was thrown in the hat for the online “election,” which was started by Chinese outside China.

Because of the court’s quick verdict (Yang was detained on Dec. 23, 2005), Yang deduced that he was given a sham trial, and decided not to appeal because his conscience was clear with regard to the charges, which he said were fabricated by a paranoid regime and were completely unjust.

According to the freedom of expression group PEN American Center, Yang is being held in Dantu District Detention Centre in Zhenjiang, in eastern China’s Jiangsu Province. PEN American Center awarded Yang the PEN/Barbara Goldsmith Freedom to Write Award in 2008.

When relatives visited Yang in September 2013, they found him suffering from chronic diseases, for which he was said to have received poor treatment.

Jailed for the Truth

At least Yang was receiving some treatment.

Back in 2000, the founders of a short-lived Epoch Times bureau in China were detained, tortured, interrogated, made to work inhumanly long hours, and imprisoned for up to 10 years.

Epoch Times was started as an online newspaper in July 2000 by group of Chinese immigrants living in Atlanta. China bureau chief Zhang Yuhui and his team provided mainland coverage from their flat in Zhuhai City, Guangdong Province.

“The website would present uncensored news for people, especially for the Chinese, because the Chinese have no access to free news,” said Huang Kui, one of the original China staff.

Huang was 1 of 10 Epoch Times journalists arrested when police came knocking on their doors on Dec. 16, 2000. Zhang Yuhui, Meng Jun and Shi Shaoping would each get a 10-year jail sentence. Huang Kui received a 5-year sentence, possibly because he was covering international news while others focused on China affairs, and in particular the CCP regime’s persecution of Falun Gong.

Falun Gong is a traditional Chinese spiritual practice based on the principles of truthfulness, compassion, and tolerance. The practice was banned by the CCP in 1999, shortly after a state-run survey estimated that there were at least 70 million people practicing Falun Gong in China, more than the membership of the CCP.

Huang was eventually sent to a labor camp, where he endured 16-hour workdays. At one point, Huang was forced to pry open pistachio shells using large pliers.

Because Huang is a Falun Gong practitioner, he also had to undergo endless sessions of brainwashing where his jailers tried without success to get him to give up the peaceful practice.

Huang was eventually released on Dec. 15, 2005, won a scholarship to Ohio State University, and is now an engineer living in Illinois.

Editor-in-Chief Zhang Yuhui, who was in his 30s when he was locked away, was released in December 2010.

According to Huang, Zhang was once put on the infamous “Tiger Bench” torture device for seven days and nights while in prison.

The “Tiger Bench” forces a person to sit with legs extended on a long, thin bench, with ropes tying the knees to the bench. Objects are then forced under the legs to bend the knees, causing extreme pain.

Today, the Chinese regime is just as restrictive of the press, if not more so.

In the 2014 annual report, CPJ also observed that CCP head Xi Jinping has been particularly repressive toward the press in 2014.

The Chinese regime mouthpiece Xinhua announced new media rules that prohibit the spread of ‘state secrets,’ but failed to clearly define what these constitute.

Reporters from international media outlets such as the New York Times, Reuters, and Bloomberg were refused visas. In July, the Chinese regime mouthpiece Xinhua announced new media rules that prohibit the spread of “state secrets,” but failed to clearly define what these constitute.

These measures represent a continuation of the “broad crackdown on free expression since Xi Jinping took office” in 2012, CPJ said.