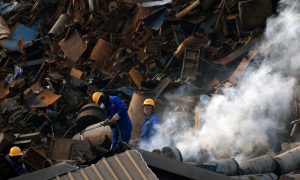 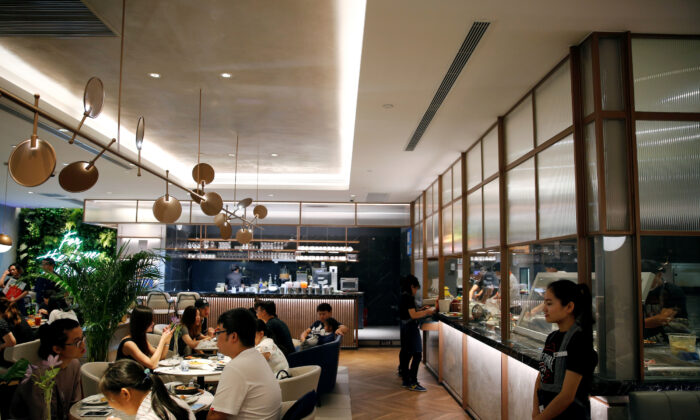 A restaurant is seen in a mall in Shanghai, China on Sept. 18, 2018. (Aly Song/Reuters)
China Business & Economy

BEIJING—China’s services sector grew at its slowest pace in seven months in September despite a strong increase in new orders, as operating expenses continued to rise at the end of the third quarter, a private survey showed on Oct. 8.

Services account for more than half of China’s economy, providing a key buffer as persistent trade tensions with the United States weigh heavily on the country’s manufacturing sector.

The Caixin/Markit services purchasing managers’ index (PMI) fell to 51.3 last month, the weakest since February, versus August’s 52.1. It has stayed above the 50-point that separates growth from contraction on a monthly basis since late 2005.

The fall was in line with the marginal drop in the official non-manufacturing PMI published by the National Bureau of Statistics. It was also in step with signs of general cooling this year as the world’s second-largest economy continues to lose momentum.

New orders for services in September grew at the fastest pace since January 2018, buoyed by product launches and stronger customer demand.

But operating costs hit a one-year high because of an increase in labor, fuel and raw material expenses.

A continued push among firms to stay competitive also limited the increase in prices that they charged, pressuring profit margins.

“China’s economy showed signs of marginal recovery in September, as the labor market improved and domestic demand increased at a faster pace,” said Zhong Zhengsheng, director of macroeconomic analysis at CEBM Group, in a statement alongside the data.

“However, fluctuations in exchange rates, and rising costs of labor and raw materials increased pressure on companies, which restrained business confidence.”

The volume of new work from abroad received increased for the third straight month in September. But after seasonal adjustments, the pace of growth further eased from July.

Expectations regarding the one-year outlook for business activity softened slightly in September. But services firms added jobs at the fastest pace since January 2017.

Beijing has rolled out a mix of fiscal stimulus and monetary easing since early 2018 to cushion the economic slowdown, including hundreds of billions of dollars in infrastructure spending and tax cuts for companies.

But those measures have been slow to trickle through the economy, and with U.S. trade pressure persisting, analysts say a deeper downturn could be inevitable without further policy support.

Caixin’s composite manufacturing and services PMI, also released on Tuesday, rose to a five-month high of 51.9 in September from 51.6 in August, though new export orders again contracted.