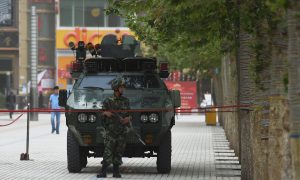 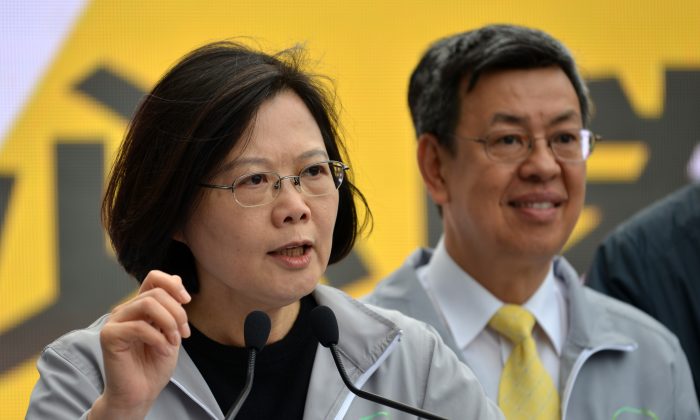 Tsai Ing-wen (L), chairwoman from Taiwan's main opposition Democratic Progressive Party (DPP) and the party's candidate for in the upcoming presidential election, speaks at an event in Taipei on Dec. 20. The Chinese Communist Party has been threatening Taiwan over the expected victory of the DPP, which favors Taiwanese independence. (Sam Yeh/AFP/Getty Images)
China

If you were to go by what’s being broadly reported in the press, you’d likely get the impression that the United States was violating some international code in its upcoming $1.83 billion arms sale to Taiwan, and that the move is somehow tied to U.S. warmongering over Chinese politics.

This, of course, couldn’t be further from the truth, but given the proliferation of propaganda from the Chinese Communist Party (CCP) that has found influence in the Western press, it’s necessary to clear things up.

It picks up a line that was commonly used in news reports on the arms sale, stating the CCP views Taiwan as a “breakaway province.” It says that while the United States does not formally recognize Taiwan as an independent nation, it has continued arms sales to Taiwan as part of an agreement that started in the 1970s.

Of course, anyone familiar with Chinese history knows the situation is a bit more complicated.

The government in Taiwan used to be broadly recognized as the official government of China, while the CCP was viewed as a rogue regime.

The United Nations only switched its stance on Taiwan in October 1971 with U.N. Resolution 2758, which took the “China” seat from Taiwan and passed it to the CCP.

It wasn’t until Jan. 1, 1979, that the United States changed its recognition of the official government of “China” from Taiwan to the CCP.

In other words, the history of U.S. arms sales to Taiwan, now being pitched as U.S. hostilities towards China, was actually the exact opposite—it began as arms sales to the official, democratic China, which was (and still is) being threatened by a hostile, totalitarian regime.

Many U.S. news outlets picked up the CCP’s line on the Taiwan arms deal—and if you were to go by the CCP’s state-run news outlets, the deal would look pretty bad. The general line, reported in Xinhua, was that the deal exposes a sort of “mentality” that acts in defiance of international law and regulations, and holds a hostile attitude.

Other CCP sources weighed how it could respond. A report from the CCP’s American Diplomacy Department, Institute of American Studies, of the Chinese Academy of Social Sciences, suggested the CCP could use economic sanctions against the defense industries involved in the arms sale.

The Wall Street Journal picked up a similar analysis as the Chinese Academy of Social Sciences. The angle of its Dec. 17 piece stated the CCP’s “options for punishing U.S. companies involved in the sales are limited.”

The piece also suggests a political agenda on the U.S. side, noting the sale was announced just ahead of Taiwan’s presidential elections, and on the heels of a rare dialogue between CCP leader Xi Jinping and Taiwanese President Ma Ying-jeou.

The actual context of the sale was quite different. What the piece fails to mention is that the CCP has been threatening Taiwan over its upcoming presidential elections—which I detailed in a Sept. 1 newsletter.

Between May and June, the CCP’s People’s Liberation Army (PLA) was holding military exercises openly aimed at Taiwan. In an image of the drills released by Chinese state media, PLA officers gave military briefings in front of a map of Taiwan.

IHS Jane’s reported the military exercises coincided with the May 29 visit of Tsai Ing-wen, the candidate for Taiwan’s Democratic Progressive Party, to the United States.

The CCP has been particularly worried about the upcoming Taiwanese elections, since the Democratic Progressive Party favors Taiwanese independence, and is leading in the polls. In fact, if the polls prove true, Tsai Ing-wen will be Taiwan’s next president, and her political party will also hold a legislative majority.

The CCP soon held another military exercise in Inner Mongolia, this time with a clearer message warning Taiwan.

CCTV, one of the CCP’s official mouthpieces, aired a video on July 5 showing military exercises where Chinese soldiers attacked a building modeled after the Taiwanese presidential office.

Quartz reported on the video on July 23, stating “some suggest that the simulated attack is China’s way of reminding Taiwan that it will make good on its promise of invading if Taiwan declares independence.”

The National Interest wrote on July 16 that the CCP’s military was practicing to invade Taiwan.

In light of these incidents, the Taiwanese military released a report on Oct. 27, stating its belief that by 2020 the CCP may invade Taiwan.

Singapore news outlet Today, reported “China has completed its planned build-up of joint forces for military engagement against Taiwan and is on its way to ensure victory in a decisive battle by 2020, Taiwan’s Defence Ministry said in its National Defence Report—released today (Oct 27).”

It wasn’t until after these incidents that the renewed U.S. arms sales to Taiwan came into play.

On Nov. 19, Senate Armed Services Committee chair Sen. John McCain (R-Ariz.) and Sen. Ben Cardin (D-Md.) issued a letter to the White House questioning why the United States had not continued arms sales to Taiwan under the Obama administration, and requested that the United States continues these sales.

“We are troubled that it has now been over four years—the longest period since the passage of the Taiwan Relations Act in 1979—since the administration has notified Congress of a new arms sale package,” the letter states.

The letter also notes that “we remain concerned that China’s ongoing military modernization, and the threat it poses to peace and security in the Taiwan Strait, is not being adequately addressed.”

So, taken in full context, the U.S. arms sales to Taiwan were quite different from what is being broadly reported—but you wouldn’t know this history if you were to just go by the CCP’s channels for disinformation.