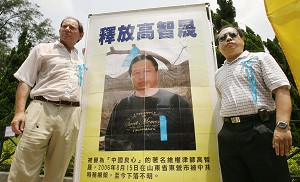 BEIJING—China's lawyers face official harassment, meddling, even jail for defending suspects and sensitive causes, a rights group said in a new report, adding to criticism of the nation's rights record before the Olympics.

Human Rights Watch says the ruling Chinese Communist Party's avowed commitment to rights and rule of law has not been matched by its treatment of lawyers seeking to defend those principles.

“Chinese lawyers continue to face huge obstacles in defending citizens whose rights have been violated and ordinary criminal suspects,” the New York-based monitoring group said in the report. “China has a long way to go to lift arbitrary restrictions on lawyers and establish genuine rule of law.”

The criticisms and demands for better protection for lawyers will add to a long list of human rights complaints about China ahead of the Beijing Olympic Games in August.

Since the late 1970s, the ruling Communist Party has abandoned its disdain for courts and lawyers, and now lawyers can make a lucrative living from commercial law.

The report describes cases of lawyers who have endured intimidation, beating and detention for defending dissidents and protesters.

Among the most prominent was Gao Zhisheng, a combative Beijing lawyer who relished contentious causes, including representing members of the banned Falun Gong spiritual practice who said they had been tortured.

Gao was sentenced to four years in jail for subversion in 2006 but won a good behaviour reprieve from prison for cooperating with authorities, before being jailed again in 2007.

Lawyers who sought to defend Chen Guangcheng, a blind rights dissident who exposed forced abortions, were briefly detained and roughed up when they tried to defend him in 2006.

“The silence of the central authorities implies that they endorsed the actions of the local officials who beat up lawyers,” one of Chen's attorneys told the rights group.

Even in otherwise unremarkable prosecutions for violent crimes and corruption, defence attorneys risk themselves becoming the targets of officials, and have been jailed for perjury on highly doubtful grounds, the report said.