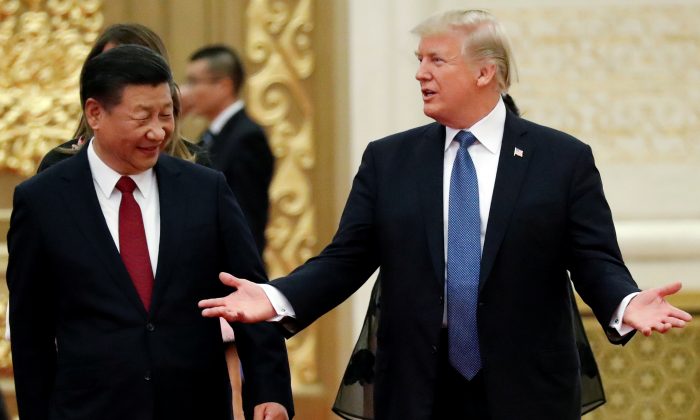 WASHINGTON—President Donald Trump has presented Chinese leader Xi Jinping with a carrot and a stick on trade negotiations between their two countries, three days after their meeting in Argentina during the G-20 summit.

In a series of tweets on Dec. 4, he recalled their “wonderful and very warm dinner” where the two discussed trade, and affirmed that both leaders “want this deal to happen.”

But if a deal doesn’t happen, he warned, “I am a tariff man.”

“When people or countries come in to raid the great wealth of our nation, I want them to pay for the privilege of doing so,” Trump said in a post on Twitter. “It will always be the best way to max out our economic power. We are right now taking in $billions in tariffs.”

….I am a Tariff Man. When people or countries come in to raid the great wealth of our Nation, I want them to pay for the privilege of doing so. It will always be the best way to max out our economic power. We are right now taking in $billions in Tariffs. MAKE AMERICA RICH AGAIN

After Trump’s Dec. 1 bilateral meeting with China at the G-20 summit, both Trump and National Economic Council Director Larry Kudlow were informed trade barriers with China will be dropped “immediately.”

U.S. Secretary of the Treasury Steven Mnuchin told Fox Business on Dec. 4 that China had responded to the meeting with “specific commitments” on agriculture, liquefied natural gas, automobiles, and industrial products, as well as promises on “additional purchases of $1.2 trillion.”

As a gesture of goodwill, Trump told Xi during their meeting he would hold off on raising tariffs from 10 to 25 percent on $200 billion worth of Chinese goods that would have taken effect on Jan. 1. He gave China 90 days to work out “a real deal,” and if it doesn’t, higher tariffs loom, he warned.

Mnuchin said the agreement would comprise two phases, the first being “very specific commitments” implemented within the 90 days, and completing the second phase “very quickly as well.”

When asked about structural changes the United States had made as a prerequisite to any trade deal, Mnuchin said he expected some things to be implemented “on a rolling basis” in phase two.

Starting during the campaign, Trump has repeatedly said he wants to level out the $375.6 billion trade imbalance with China, and has called for the country to remove barriers like tariffs and protectionist measures like subsidies.

Mnuchin said that if these and other predatory trade practices China uses to the United States’ disadvantage are corrected, “the trade deficit will take care of itself.” If not, he said the United States is prepared to increase tariffs, “without reciprocal tariffs attacking us.”

U.S. Trade Representative Robert Lighthizer is taking over as lead negotiator from Mnuchin, who will continue to be involved in deals. Kudlow called Lighthizer the “best trade negotiator in the business” and expressed confidence that he would keep China on track with its commitments.

Lighthizer is considered by many to be a China hawk and is in favor of taking a “more aggressive approach” to China.

Based on the report’s findings, Lighthizer said in a written statement that China “has not fundamentally altered its unfair, unreasonable, and market-distorting practices.”

U.S. negotiators have a list of 142 requirements that China has to agree to before it enters into a trade deal.

In a phone call with reporters Dec. 4, Kudlow, who accompanied Trump to Argentina, said that based on his conversations with Chinese Vice Premier Liu He, Liu and his staff were taking those demands seriously.

After going into previous talks with Chinese negotiators “rather optimistic,” Kudlow said he became “somewhat cynical” when those talks didn’t produce results. After seeing the depth and breadth of the conversation Trump and Xi had in Argentina, Kudlow said he was “cautiously optimistic.” Instead of being hammered out by lower-level officials, he said Xi came very prepared for the conversation, and that the deal was mostly done by the two leaders.

Kudlow also noted the relationship between Trump and Xi, which he described as having “chemistry,” as part of the reason for his optimism.

“You know, we’ve been hearing that they’re friends and so forth,” he said. “I do think it means something, I do. I think personal relationships matter and we’ll see how this turns out.”