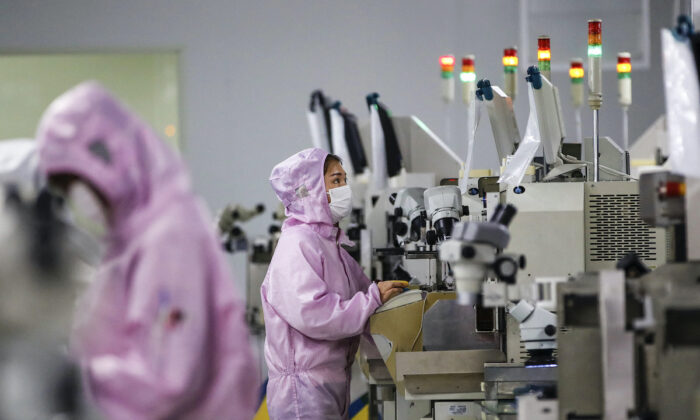 The U.S.-China technology war has brought decoupling between the two big powers. Both sides are bracing for losses in the technological and industrial sectors. However, China’s losses are significantly greater than those of the United States, a report by a research institute of Peking University reveals.

A Jan. 31 report by Peking University’s International Institute for Strategic Studies (IISS), published on its official site, said that China still has a long way to go toward being a technologically powerful country, and the United States still leads the world in technology, both horizontally and vertically.

However, Peking University canceled the academic survey on Feb. 4 due to the authorities’ hefty censorship. Its standpoint, different from the official one, has already drawn public attention. Storm Media Ltd., based in Taiwan, used a screenshot of part of the report in its Feb. 3 report.

Ji Lin, a Japanese current affairs commentator and software development engineer, said in an interview with the Chinese edition of The Epoch Times, the U.S.-China technology war is more than a competition between the two countries, the U.S. might need to take more protective measures to prevent the Chinese Communist Party (CCP) from “forcing U.S. companies to transfer technology and stealing U.S. intellectual property.”

The CCP’s pursuits to “overtake on the curve” or “reverse R&D” are actually plagiarizing and copying the advanced and mature products and technologies from abroad, which saves a lot of research and development time and reduces the cost and risk of new product development, Ji said.

The Peking University report said that compared with the United States, China is leading in only a few areas, while most areas are clearly lagging behind, especially in some sub-disciplines where disadvantages are obvious and technology gaps exist. Some key technology areas stall in a “bottleneck,” especially in the chip R&D field and domestic enterprises are abundant but less competitive, most of them sustained at the level of homogeneous development and inferior duplication, with core equipment and components relying heavily on imports.

High-end chip autonomic R&D and supply seem to be beyond China’s capabilities, Ji said. China will not be able to solve this problem for a long time as the country is systematically all-round backwards in the field of chips. Moreover, it is difficult to save costs through the regime’s “reverse R&D” methods in this area.

According to Ji, Chinese authorities failed to help Chinese chip makers win international competitions, and their efforts would be inefficient and in vain “because the chip industry requires creativity, and creativity requires independent spirit and free-thinking, which the Chinese Communist system has no tolerance [for],” Ji said.

Qin Xiquan, a pro-democracy activist living in Australia, shared similar views, “China’s inability to develop high-end chips is not because Chinese people are not smart enough, on the contrary, Chinese people are no less intelligent than people in other countries, but the Chinese communist system has stifled their intelligence.”

And in the artificial intelligence area, the United States has an apparent advantage in originality and innovation in basic research and is far ahead in core industrial technologies such as chips, algorithms, and machine learning. In addition, the United States is the world’s premier destination for AI talent to pursue higher education and employment. The U.S. universities have taken the lead in establishing a full set of AI talent development systems and laboratories, while China has only started in the area in the past three years, the report said.

Currently, the number of Chinese talented people in high-end R&D is less than that in the United States. Although China has trained a large number of AI undergraduates, about 56 percent of the top AI talent chooses to work in the United States, and only 34 percent are employed in China. Among those who went to the United States to study, 88 percent stayed there after graduation. And only 10 percent returned to China.

As to the aerospace field, China has its own technology in the aerospace and military aviation sectors, but its civil aviation industry is at a distinct disadvantage in that it needs to purchase complete aircraft or core components from the United States and other Western countries. Due to U.S. scrutiny and restrictions over investment and trade, it is difficult for Chinese companies to acquire core technologies through acquisitions, the report said.

Since the end of 2017, the United States has made a major shift in its policy toward China to curb China’s “forced transfer technology of U.S. companies and theft of U.S. intellectual property.” In this case, the report said, China strengthened its own innovation capabilities in order to escape from the dilemma of having its vital core technologies controlled by others.

The United States did not specify the boundary line of technology decoupling; but has reached a consensus on some crucial technologies and products such as chips and chip manufacturing equipment, along with AI technology.

Areas not decoupled by the United States and China are only in low-tech and low-value-added industries.

Meanwhile, the United States is working with its allies to form a coalition of democracies for science and technology to isolate and restrict China from buying critical products from third countries, and from bringing advanced technologies and high-end talent to China, the report said.