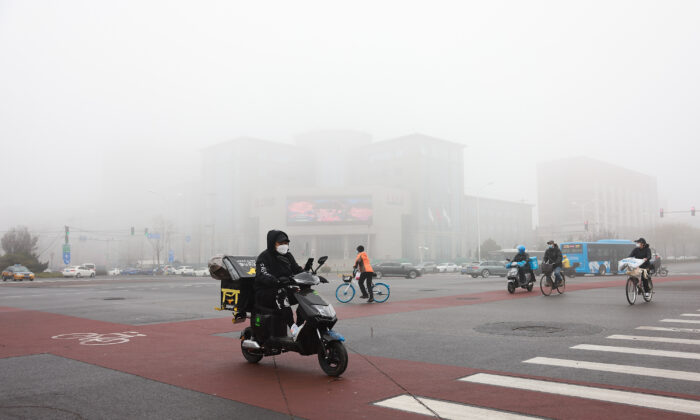 People wear masks as they travel along a street during smoggy weather in Beijing, China, on Nov. 18, 2021. (Lintao Zhang/Getty Images)
China Business & Economy

Despite the pandemic lockdowns and economic difficulties, China has ordered a nationwide production cut and factory shutdowns in a bid to implement its environmental control policy set for the upcoming Winter Olympic Games.

The goal of China’s latest environmental campaign is to improve air quality and create a “blue sky” over Beijing, the host city of the Games. The neighboring city of Tianjin and northern provinces with heavy industries—including Hebei, Shanxi, and Shandong—were ordered by authorities to reduce the number of days of heavy pollution and decrease the average PM2.5 concentrations from Oct. 1 to March 31, 2022, according to an Oct. 29 document from China’s Ministry of Ecology and Environment.

“[The] production has been halted, work has been suspended, and salaries have been reduced,” Wang Chuan (pseudonym), a Chinese worker from one of the northern industrial provinces, told the Chinese publication of The Epoch Times. He added that most of the companies near his workplace have shut down due to the new official policy.

The Chinese Communist Party (CCP) sees the Olympics as part of an effort to boost its international image and consolidate its power, but air pollution is a major problem.

According to the U.S. Embassy in Beijing, visibility was less than 219 yards in parts of Beijing, and the PM2.5 reading in urban areas was as high as 234 micrograms per cubic meter on Nov. 5, according to Reuters.

The data is much higher than China’s 2017 annual PM2.5 level, which was 57 micrograms per cubic meter—nearly six times the limit considered acceptable by the World Health Organization—according to the World Economic Forum on Feb. 10.

The municipal authority of Tangshan, Hebei Province, released an “air quality protection plan” for the 2022 Beijing Winter Olympics earlier in August, Chinese web service Sina reported on Aug. 10. The plan called for a reduction in the production of 12.37 million tons of crude steel until March 2022, to shut down blast furnaces under 1,000 cubic meters and converters under 100 tons, and to prohibit heavy load vehicles from traveling through the area.

Sina media cited a financial source as saying that the emission cuts, production restrictions, and shutdowns in crude steel and other industries that began in the second half of this year will continue until the end of the Games.

In response to the air pollution control policy, some parts in the north—including Hebei Province, Shandong Province, Dalian city, and Shenyang city—have activated the emergency measures due to heavily pollution, state-run China Power reported on Dec. 3.

The production cuts also applies to some areas in Southern China such as Kunshan city of Jiangsu Province, which is the base of the electronics industry in the country. The local enterprises, including a wholly-owned subsidiary of Anhui Shiny Electronic Technology Co. Ltd, received notices of power restrictions.

“Enterprises in Hebei Province are really having a hard time,” Wang said. He added that due to the economic recession, plus harsh environmental policies, many enterprises, especially those in the downstream production of the supply chain, have begun their annual Chinese New Year shutdowns early.

Migrant workers have already embarked on their homeward journey, according to China Coatings Purchase Net on Nov. 30. During the Lunar New Year, which falls on Feb. 1, 2022, Chinese workers are generally given two weeks vacation. Some companies in Guangdong have already announced shutdowns and a three-month holiday. Many printing and dyeing and textile enterprises in Zhejiang Province, the ceramic industry in Guangxi Province, and enterprises in Jiangxi Province have started closing for the holiday.

Chinese state media reported that some enterprises in the cities of Shanghai and Shenzhen gave their employees “an indefinite holiday” period, starting on Dec. 1, due to lack of orders and uncertainty of operating prospects, saying that employees can find other jobs elsewhere.