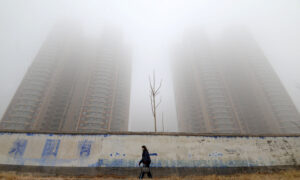 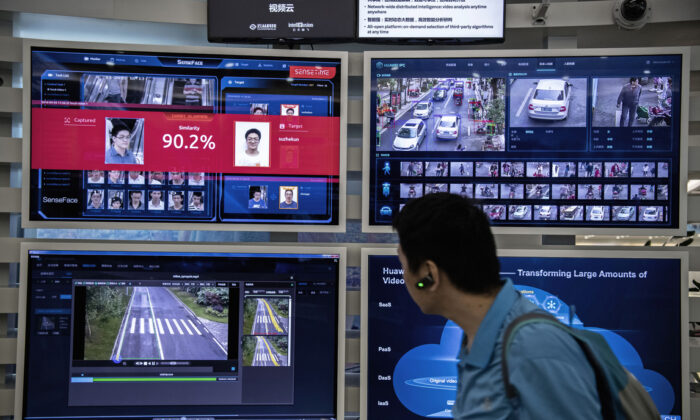 A display for facial recognition and artificial intelligence is seen on monitors at Huawei's Bantian campus on April 26, 2019 in Shenzhen, China. (Kevin Frayer/Getty Images)
US-China Relations

WASHINGTON—Beijing now leads in a number of emerging revolutionary technology industries, and U.S. government officials are sounding the alarm, saying the country’s relationship with the Chinese Communist Party (CCP) must change when it comes to technology transfers.

Michael Brown, the director of the Defense Innovation Unit at the Department of Defense, warned on Oct. 29 about the near-term direct costs of China’s technology thefts. His comments during a panel discussion at the headquarters of the Center for Strategic and International Studies included how U.S. companies will lose market share due to China’s “Made in China” 2025 plan, which he said is a large import substitution plan to transfer economic output from other countries to China.

China has built up its technology largely on what it’s stolen from the West, with the costs of intellectual property theft amounting to an estimated $600 billion annually, while inextricably threatening U.S. national and economic security.

Long-term consequences include U.S. businesses becoming less competitive over time and the United States losing the ability to set standards and practices to ensure safety and quality of products. Likewise, national security will also be compromised with the U.S.’ military advantage taken away, according to Brown.

The United States has set technology standards for the past 50 to 80 years, particularly since World War II, Brown said. However, he said that’s under threat now that China leads in a number of important emerging technologies.

“Imagine what the world would look like if China were setting standards in six game-changing technologies like hypersonics, quantum sciences, autonomy, artificial intelligence (AI), 5G, genetic engineering, and space,” Brown said, noting that all these technologies, aside from hypersonics, are also vital for economic prosperity, not just militarily.

“Well, you don’t have to imagine, because China is already setting the pace for a number of those technologies,” he said at the panel, titled “Managing the Risk of Tech Transfer to China.”

The United States is playing catch-up when it comes to hypersonics, while China is ahead in AI because of facial recognition technology, Brown said. In the quantum sciences, China leads because of the launch of its first quantum communications satellite in 2016.

With respect to genetic engineering, Brown said there’s no reciprocity in data sharing between China and the United States, leaving the United States to use Chinese equipment for genome sequencing; China now has more data on the genetic sequencing of the U.S. population than America does.

In addition, China last year had more space launches than the United States.

Brown also spoke about reforming export controls and cooperating with allies to ensure that technology isn’t transferred to other countries. The National Defense Authorization Act for Fiscal Year 2019 contains the Foreign Investment Risk and Review Modernization Act, which would stop acquisitions of critical U.S. technologies via foreign investment and seeks to “close loopholes in the export controls process by increasing restrictions on the transfer of emerging and foundational technologies to foreign persons.”

Economic espionage by China, which is already the most active perpetrator, continues to expand, according to a White House Office of Trade and Manufacturing Policy report titled “How China’s Economic Aggression Threatens the Technologies and Intellectual Property of the United States and the World.”

The main focus of the report investigates two categories of China’s economic aggression: how it’s acquiring key technologies and intellectual property from other countries, and the capturing of emerging high-technology industries that will drive future economic growth and advancement in the defense industry.

China is engaging in systematic economic espionage on a variety of fronts, the report states, including physical theft, cyber-enabled espionage and theft, evasion of U.S. export control laws, counterfeiting and privacy, forced technology transfers from foreign companies, reverse engineering of U.S. products, and foreign ownership restrictions that force or induce the transfer of technology and IP, often as a condition of access to the Chinese market.

Dr. Robert J. Bunker, an adjunct research professor at the U.S. Army War College Strategic Studies Institute, told The Epoch Times that China has engaged in a “pervasive pattern” of ongoing intellectual and advanced technology theft over the past decade. While the regime claims to be cooperating with the West to limit such theft, that’s “nothing more than a smokescreen and stalling action meant to allow these activities to continue.”

“It is imperative for U.S. national security purposes that the CCP regime does not gain access to Western advances—such as the capabilities related to Google’s recent ‘supremacy’ announcement—in quantum computing technology,” Bunker said via email.

“This technology will provide the basis of new generations of AI which will be key to 21st-century economic infrastructure and warfighting capabilities,” he said. “These capabilities will define the very essence of what it means to be a great power in the future.”

Panelist Eileen M. Albanese, director of the office of national security and technology transfer controls at the Bureau of Industry and Security, said an “Emerging Technology Technical Advisory Committee” has been formed and will meet with the bureau later this year.