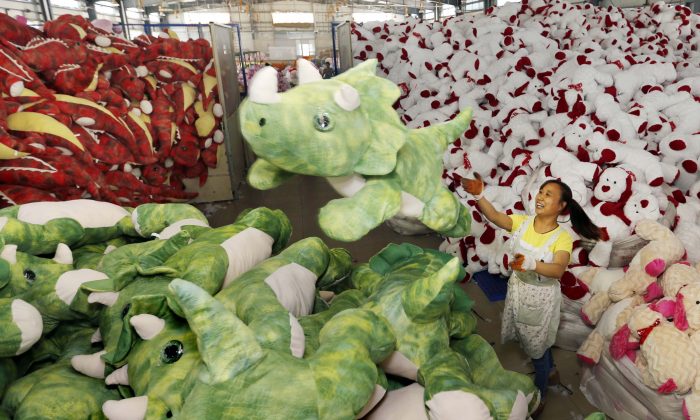 A Chinese worker stacking soft toys at a factory before packing them for export, in Lianyungang, China's Jiangsu province on Sept 6, 2015. (STR/AFP/Getty Images)
Business & Economy

China Only Growing at Around 5 Percent According to J.P. Morgan’s Head of Research

NEW YORK—Nobody, not even the Chinese regime knows whether the economy is still growing or contracting at this moment. The only thing most people—including the regime—can agree upon is the official numbers are bogus.

“The Chinese economy clearly is not growing at anything like 7 percent,” billionaire investor Wilbur Ross Jr. of WL Ross and Co. told Epoch Times. He thinks it’s more like 4 to 5 percent rather than the officially propagated 7 percent.

If we follow the reasoning of J.P. Morgan’s head of research Joyce Chang, he might just be right.

“We estimate every 1 percent slowdown in China takes about 0.5 percent off of global growth. That impact on emerging markets is more severe than on developed markets,” she said at a panel discussion at the Council on Foreign Relations on Sep. 16. It has more of an impact on Japan … and emerging markets: you have a 1:1 impact.”

So far so good. However, she then proceeds to say that Latin America is in recession, as well as Russia. Japan isn’t doing great either, so if we take the 1:1 impact literally, China is not only growing at far less than 7 percent, the slowdown is also accelerating.

Let’s look at the year-over-year numbers for the recent quarters for some of China’s most important trading partners.

Of course, each country has its own special situation. Japan is fiddling around with taxes as well as monetary policy. The low oil price as well as Western sanctions surely aren’t helping Russia. But the marked slowdown of 1 to 2 percent in most cases, especially for the commodity exporters as well as the crash in China trade show a clear pattern that started in Q3 2014.

If we take Joyce Chang’s calculations at face value, we are looking at Chinese growth at around 5 percent, exactly where Wilbur Ross put it.

Citigroup’s chief economist chimed in with his own estimate during the panel: “We are seeing the deceleration of investment we are not seeing the pickup of consumption. This to me reads recession Chinese-style. Growth of 2–3 percentage points lower now than it is today,” he said.