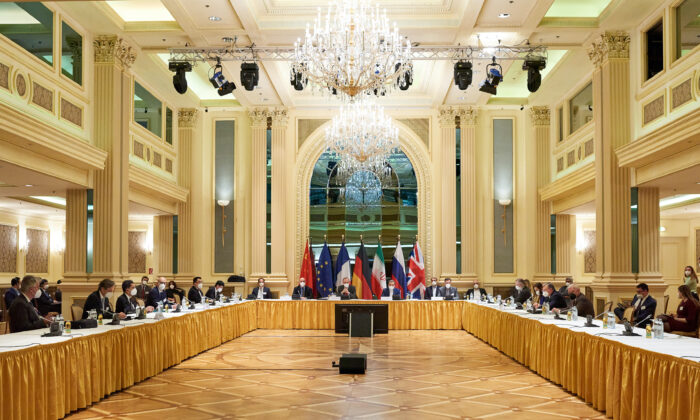 Representatives of the European Union, Iran, and others attend the Iran nuclear talks at the Grand Hotel in Vienna, Austria, on April 6, 2021. Representatives from the United States, Iran, the EU, Russia, China, and other participants from the original Joint Comprehensive Plan of Action (JCPOA) are meeting directly and indirectly over possibly reviving the plan. (EU Delegation in Vienna via Getty Images)
Thinking About China

China is implicated in Iran’s international money laundering system, according to a new report by The Wall Street Journal.

The Journal “reviewed financial transactions for scores of Iranian proxy companies in 61 accounts at 28 foreign banks in China, Hong Kong, Singapore, Turkey and the United Arab Emirates totaling several hundred million dollars,” according to the exclusive report, published on March 18.

“Western intelligence officials say there is evidence of tens of billions of dollars of similar transactions,” it said.

All of the countries mentioned, plus the territory of Hong Kong, have close ties to Beijing. Hong Kong is under full control of the Chinese Communist Party, which abrogated the city’s independent freedoms conclusively in 2017.

The Singapore public is a global outlier in its support for China, with 64 percent having a positive view of the totalitarian country, compared with a median of 27 percent in all countries surveyed by the Pew Research Center in 2021.

The United Arab Emirates (UAE) is also close to Beijing, to the point of allegedly hosting a secret Chinese detention center and extraditing Uyghurs to China for the sole “crime” of practicing their Muslim faith.

A Bloomberg report in December noted that the UAE was purchasing Iranian oil in violation of sanctions, and enabling the Iranian oil trade with UAE-based financial institutions.

At the time, China had also stepped up purchases of Iranian oil. The Biden administration argued that a diplomatic approach was preferable to confronting Beijing about its support for Iran. The administration denied relaxing Trump-era sanctions.

The Iranian regime has confirmed much of the most important information in the Journal’s new report, having boasted publicly about its ability to conduct global trade, despite Western sanctions against its nuclear weapons programs.

In 2018, then-President Donald Trump withdrew from the Iran nuclear deal, which was agreed in 2015 and is known as the Joint Comprehensive Plan of Action (JCPOA). Trump reimposed sanctions on Iran, which President Joe Biden claims to have kept. But in response, Iran has been rebuilding its nuclear program, which is now close to the point of no return. Along with it getting closer to a nuclear bomb, Tehran’s demands have increased such that any new JCPOA deal would be better for the rogue state than would the original JCPOA.

Then-Secretary of State Mike Pompeo attempted to reimpose United Nations sanctions on Iran in 2020 but was rebuffed by U.N. Secretary-General Antonio Guterres. The Biden administration rescinded Pompeo’s attempt to reimpose U.N. sanctions in 2021 but unilateral U.S. sanctions remain in place. In an attempt to restart stalled nuclear talks with Tehran, the Biden administration moved to tighten the sanctions in December, but that has had no appreciable effect.

Ian Talley, the author of the new report, wrote that “Iran established a clandestine banking and finance system to handle tens of billions of dollars in annual trade banned under U.S.-led sanctions, enabling Tehran to endure the economic siege and giving it leverage in multilateral nuclear talks, according to Western diplomats, intelligence officials and documents.”

The success of the Iranian network must have provided an example to Russian President Vladimir Putin when he invaded Ukraine, as a means, enabled by Beijing, to maintain international trade while under sanctions. Iran is close to Russia, both of which are part of China’s Shanghai Cooperation Organization (SCO), the closest that Beijing gets to an international alliance such as the North Atlantic Treaty Organization (NATO). Turkey is a “dialogue partner” of the SCO.

Iran has sought membership in the SCO for 15 years and finally, in September, was fully admitted to the organization. The SCO is a loose group of increasingly rogue nations dependent upon China for trade due to their pariah status internationally.

Burma (Myanmar), sanctioned for its bloody 2021 coup and ostracized for its genocide against the Rohingya, could also be using international money laundering networks facilitated by Beijing. Burma’s ambassador to China met with the SCO Secretary-General in February and pledged his full support to the organization.

In 2021, Iran signed a 25-year “strategic accord” with China for economic and military cooperation. It went into the implementation stage in January. Over the last three years, China has defied sanctions to purchase Iranian oil at a discount from global market prices. Iranian President Ebrahim Raisi has emphasized his “Asia-centric” foreign policy that benefits China.

Beijing need not be so devoted to Tehran, however, due primarily to China’s economic power, massive global trade networks, and the dependency of the world on supply chains that reach into China’s deep industrial and technological manufacturing base. As William Figueroa noted in The Diplomat, “Iran may be forced to ‘Look East’ in the wake of the U.S. withdrawal from the JCPOA, but the Chinese government continues to look in many directions at once.”

The West keeps trying to convince China, Russia, Iran, and North Korea to play by international rules, like nuclear nonproliferation and a political evolution toward a better conception of human rights that were established after World War II to maintain international peace. But these countries, run by power-hungry dictators, keep refusing. The sincere attempts by democracies in this respect are a fool’s errand, where the fool is told repeatedly to kick the can down the road.

With China’s economic and military rise, however, the road is running out. It is time to toughen sanctions on all of these autocratic regimes, starting with their leading member in Beijing, and break the economic ties between them that enable their repeated and egregious violation of the international norms meant to preserve peace and security globally.