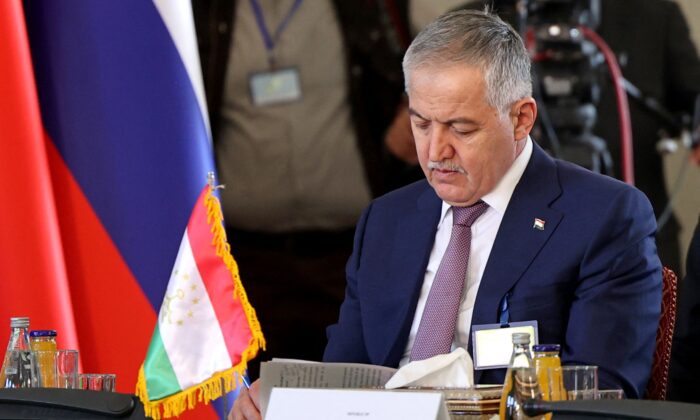 As the Chinese regime sets its sights on the vacuum left by the United States in Afghanistan, neighboring Tajikistan is also finding itself in the crosshairs of Beijing’s long-term strategy. The small landlocked country is the latest subject of the regime’s interests in Central Asia.

The Chinese regime will be putting up $8.5 million to build an outpost for a special forces unit of Tajikistan’s police near the border with Afghanistan. Plans for the security outpost were announced on Oct. 28. According to a Tajikistan parliamentary spokesman, “All construction is funded by the Chinese side, [and] after construction, the base will be transferred to the Tajik [police].”

According to experts, the Chinese regime is concerned about the Turkistan Islamic Party (TIP), formerly known as the East Turkistan Islamic Movement. Founded in the far western Xinjiang region of China, this ethnic Uyghur Islamic extremist organization fought side-by-side with the Taliban against the United States and NATO forces in Afghanistan. The organization hopes to establish an independent state in Xinjiang, where the Chinese regime has deployed an expansive campaign of repression against the Uyghurs and other ethnic Muslim groups

Bill Roggio, a senior fellow at the Foundation for Defense of Democracies (FDD) and the editor of FDD’s Long War Journal, told The Epoch Times that TIP is a legitimate concern for the Chinese regime. Another group Jamaat Ansarullah, known as the Tajik Taliban, is closely aligned with TIP and is a threat to both Central Asia and China, he said.

Thus, according to Roggio, a security outpost in Tajikistan could be used as “a forward operating base or a listening post” to gain a better understanding of threats in the region—a great benefit to both Tajikistan and China.

Tajikistan is very concerned about security and is “ripe” for a security relationship with China, according to Roggio. He considers Tajikistan the only “stan” that’s not fully receptive to the Taliban’s rule of Afghanistan. “Turkmenistan and Uzbekistan, for example, seem a little more amenable to the Taliban.”

Weary about the Taliban’s ability to control or quash groups like TIP and Jamaat Ansarullah, Roggio believes the Chinese regime has an opportunity to increase its influence in Tajikistan, while also bolstering its influence in the years ahead.

Retired Major General Jeffrey Schloesser —former commanding general of the U.S. Army’s 101st Airborne Division and NATO’s Regional Command-East in Afghanistan—spoke to The Epoch Times about the Chinese regime’s motives and long-term strategies. He said it is most important to recognize their “ability to play the long game.”

Ben Varlese, a former U.S. Army Mountain Infantry platoon sergeant and global security expert, agreed. He stated that “the Chinese regime never does something for the immediacy, but their actions are always for the long game.”

It is clear the Chinese regime is interested in competing in Central Asia on multiple fronts, including militarily, diplomatically, and economically, according to Roggio. In light of the withdrawal of U.S. troops from Afghanistan, he said Beijing’s interests have piqued in the region.

Varlese said, “the vacuum left by the withdrawal creates and avenue for the Chinese regime to ease themselves into the region.” He said, “in due time, they’ll start asserting their own regional hegemony, pushing themselves further into Central Asia and Afghanistan.”

To assert more influence on Afghanistan, Schloesser said the regime has every intention to posture itself around the South Asian country through what he calls “an encirclement strategy.”

The strategy includes a footprint in a variety of points around Afghanistan.

Establishing roots north of Afghanistan in Tajikistan is “a really brilliant move by the Chinese regime strategically,” he said. “It provides a future entry point.” A large seaport already exists south of Afghanistan in Pakistan. It’s the Gwadar Port, jointly controlled by the Maritime Secretary of Pakistan and China Overseas Port Holding.

Since China is a strategic partner and top-trading partner to Iran, Schloesser doesn’t consider the west to be a priority at this time. However, he expects to see a point of entry develop in Pakistan near Jalalabad, on Afghanistan’s eastern border.

As the regime’s apparent strategy to surround Afghanistan falls into place, he would not be surprised to “see a further degree of encroachment into the country over the next couple of years.”

Economic reasons are not the top priority of China’s multi-million dollar investment in Tajikistan, according to Schloesser. “The number one reason is purely a strategic one that brings military and diplomatic influence to the top of the list.”

“China is no longer a regional power in Asia; it’s a world power,” Schloesser said. Establishing a footprint in a large number of countries, now including Tajikistan, allows the Chinese regime the ability to “wield more influence,” he said.

Schloesser said the improvements to Tajikistan’s infrastructure may only be a means to an end. Ultimately, he said the Chinese regime is looking to position their diplomatic, intelligence, and military forces throughout the world and the area north of Afghanistan has their interest.

Roggio calls the Chinese regime’s plan to build a security outpost “more of subtle military play than an overt military play.” He considers the Chinese Communist Party “a bad actor” in regard to Taiwan, for example, but he doesn’t believe showing all their military might near Afghanistan is “a primary play” for the regime. Instead, he said, “it may best be described as a subtle spread of influence.”

In the short to medium term, Roggio does not foresee that China would have “any real desire of overt occupation” in Afghanistan. The Chinese regime is likely deterred after observing four decades of U.S. and Russian intervention in Afghanistan, he noted. “Occupation is probably a game it doesn’t want to play.”

However, he said, “having a presence or some influence in Afghanistan is not the same as going all in.” While Roggio said he doesn’t want to give the Chinese regime too much credit, he suspects “they understand their limitations in the region.”

Doing all it can to avoid strife in the region, Roggio said, “the Chinese are looking to gain influence in the region and increase their footprint.”

According to Varlese, “It’s a soft power move to provide infrastructure support under the guise of a security operation.”

Each of the experts agreed, the Chinese regime’s actions in Tajikistan are part of a long game. Strategy. Beijing will continue to encroach upon Central Asia, gaining the degree of influence that best suits their military, diplomatic, and economic needs.

Tajikistan is Central Asia’s most impoverished country, and as Schloesser pointed out,

“It’s not a secret that China has invested in countries that cannot finance their own infrastructure.” The Chinese regime’s strategic interests seem to outweigh the cost of its investments around the world, he added.

Schloesser said the end game is that the Chinese regime wants more access Afghanistan—and he considers Tajikistan a great participant to their plan. “Eventually, there will be a huge amount of pressure on Tajikistan to basically do things China’s way.”

By working with Tajiks, Varlese said the Chinese regime is creating an example for the Taliban to witness. “By fostering a relationship with Tajikistan,” he said, “it’s going to show the Taliban that they can be a long-term partner going forward.”

According to Varlese, the CCP will ravish Afghanistan’s estimated $1 trillion worth of mineral deposits as it continues to make great efforts to gain influence in the region. “The Chinese regime may now appear as the benign benefactor, but sooner or later,” he said, “they will show their true colors—and Afghanistan’s will be taken from them.”