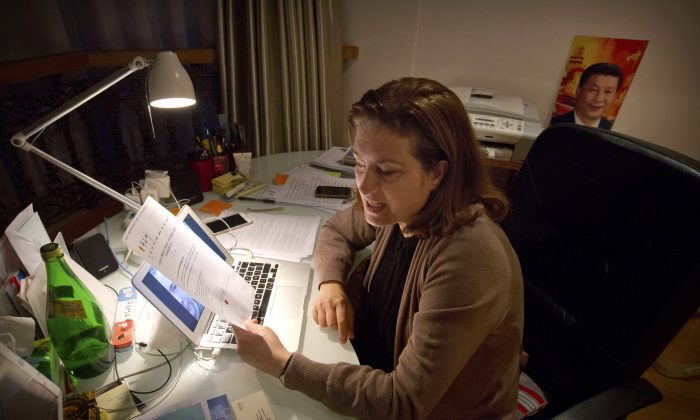 French journalist Ursula Gauthier, a reporter for the French news magazine L'Obs, holds a statement criticizing her from the Chinese Ministry of Foreign Affairs as she sits at her desk in her apartment in Beijing, Saturday, Dec. 26, 2015. (AP Photo/Mark Schiefelbein)
China

BEIJING—China said Saturday that it will not renew press credentials for a French journalist, effectively expelling her following a harsh media campaign against her for questioning the official line equating ethnic violence in China’s western Muslim region with global terrorism.

Expecting the move, Ursula Gauthier, a longtime journalist for the French news magazine L’Obs, said late Friday night that she was prepared to leave China.

Once she departs on Dec. 31, she will become the first foreign journalist forced to leave China since 2012, when American Melissa Chan, then working for Al Jazeera in Beijing, was expelled.

Gauthier on Saturday called the accusations “absurd” and said that emboldening terrorism is morally and legally wrong. “I should be legally [prosecuted] if that’s the case,” she said.

“All this is rhetoric,” Gauthier said. “It’s only meant to deter foreign correspondents in the future in Beijing.”

In a statement Friday, the French foreign ministry said: “We regret that the visa of Madame Ursula Gauthier was not renewed. France recalls the importance of the role journalists play throughout the world.”

The Foreign Correspondents’ Club of China said the accusation that Gauthier supports terrorism “is a particularly egregious personal and professional affront with no basis in fact.” It said it was appalled by the decision and expressed concerns that Beijing was using the accreditation and visa process to threaten foreign journalists.

“The FCCC views this matter as a most serious development and a grave threat to the ability of foreign correspondents to work in China,” it said in a statement.

The fallout began with Gauthier’s Nov. 18 article, shortly after the attacks in Paris. She wrote that Beijing’s proclaimed solidarity with Paris is not without ulterior motives, as Beijing seeks international support for its assertion that the ethnic violence in its Muslim region of Xinjiang is part of global terrorism.

Gauthier wrote that some of the violent attacks in Xinjiang involving members of the minority Uyghur community appeared to be homegrown, with no evidence of foreign ties—an observation that has been made by numerous foreign experts on security and on Xinjiang’s ethnic policies and practices.

Advocacy groups have argued that the violence is more likely to be a response to Beijing’s suppressive policies in Xinjiang.

Beijing blames the violence on terrorism with foreign ties. Amid a counterterrorism campaign, a Xinjiang court last year sentenced a Uyghur (pronounced “WEE-gur”) scholar critical of China’s ethnic policies in Xinjiang to life in prison. This month, a Beijing court convicted a prominent lawyer of fanning ethnic hatred based on his comments that Beijing should rethink its Xinjiang policies.

In her article, Gauthier focused on a deadly mine attack in a remote region of Xinjiang, which she described as more likely an act by Uyghurs against mine workers of the majority Han ethnic group over what the Uyghurs perceived as mistreatment, injustice, and exploitation.

On Friday, Gauthier said that the Foreign Ministry demanded her to apologize for “hurting Chinese people’s feelings with wrong and hateful actions and words,” and to publicly state that she recognizes that there have been terrorist attacks in and outside Xinjiang.

She said she was also asked to distance herself from any support group that presents her case as infringement of press freedom in China.