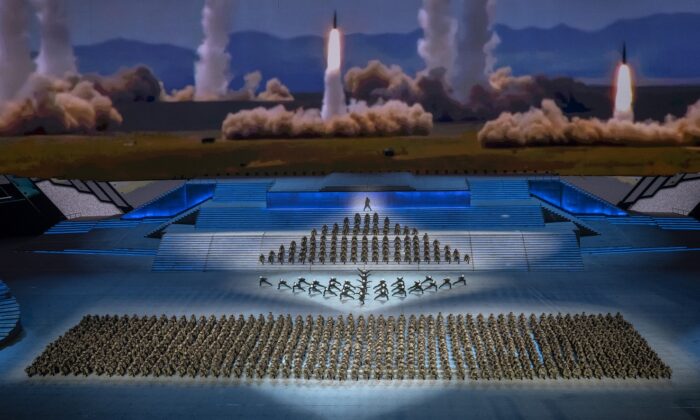 Performers dressed as military dance in front of a screen showing rockets being launched during a mass gala marking the 100th anniversary of the Communist Party at the Olympic Bird's Nest stadium in Beijing, on June 28, 2021. (Kevin Frayer/Getty Images)

I am sure it’s a totally unfounded rumor that the Central Intelligence Agency, the world’s most lavishly funded bastion of spooks, is about to shorten its name to “The Central Agency,” retiring the embarrassing and divisive word “intelligence.”

I don’t know how the rumor got started, but the news, reported on Oct. 16 by The Financial Times, that in August, the Chinese had successfully tested a nuclear-capable hypersonic missile, lit a fire under the rumor mill.

It wasn’t so much the fact of the test as the ignorance of our so-called intelligence services that did the trick.

According to the FT, “The test has raised new questions about why the US often underestimated China’s military modernization.”

When it came to the Soviet Union, the CIA typically overestimated not only its military capabilities but also its economic strength. With China, the opposite seems to be the case.

“We have no idea how they did this,” said one spokesman quoted by the FT.

But why? Why didn’t we know?

The budget of the CIA is classified, but we know, because of Edward Snowden, that a few years ago that it was somewhere north of $50 billion. But what do we get for all that dough?

This summer, we got a total misreading of the situation in Afghanistan.

Now, we get a situation in which the deployment of a weapon designed to circumvent our missile defense capabilities catches the CIA “by surprise.”

As the FT reported, the United States and Russia also are developing hypersonic weapons, “including glide vehicles that are launched into space on a rocket but orbit the earth under their own momentum.”

So what are we paying for?

The Chinese launched a rocket that carried a hypersonic glide vehicle that, traveling at about Mach 5, circled the globe a couple of times in a low orbit before homing in on its target. The device missed its target by more than 20 miles, but when you are talking about something capable of carrying a nuclear payload that is definitely too close for comfort.

Moreover, this was only a test. Presumably, succeeding missiles will be more accurate.

People familiar with the test said that it showed that China had made “astounding” progress on hypersonic weapons.

But again, the issue isn’t so much Chinese technical progress as U.S. ignorance.

Increasingly, it seems, the institutions we have relied on to protect us have degenerated into a state of politically correct rancidness.

The FBI seems to spend enormous resources infiltrating, egging on, and indeed fomenting the very plots they are supposed to be guarding against.

At least a dozen FBI agents were part of the plot to kidnap Michigan Gov. Gretchen Whitmer.

Were they there to protect the governor or to orchestrate the caper?

Julie Kelly has just shown that the Jan. 6 demonstration at the Capitol could well have been part of the FBI’s “Operation Cold Snap.” (See also Darren Beattie’s story on possible FBI involvement in the events of Jan. 6 in Revolver News.)

Quoting a story from Buzzfeed, Kelly notes that the operation was a “‘far-reaching, multi-state domestic terrorism investigation’ to surveil—or more likely entrap, … people tied to the FBI’s hit list of right-wing militias.”

Meanwhile, the U.S. military seems more interested in studying “white rage,” circumventing the chain of command to combat the Bad Orange Man, or complaining about the Army policy regarding fingernail polish than actually protecting U.S. citizens and interests.

And the CIA? Besides missing threats (a habit that goes back at least to 9/11), they seem expert mostly to be creating their fair share.

Remember the story of that training exercise in Virginia at which they accidentally left some plastic explosive in the engine compartment of a school bus?

Yes, that’s right. “The CIA accidentally left a ‘putty-type’ battlefield explosive beneath the hood of a Loudon County, Virginia, school bus after a training exercise. … As a result, elementary and high school students spent two days riding the bus as the explosives bounced around under the hood.”

Oh, dear. More and more, it seems, Li’l Abner had it right: “The Country’s in the Very Best of Hands.”