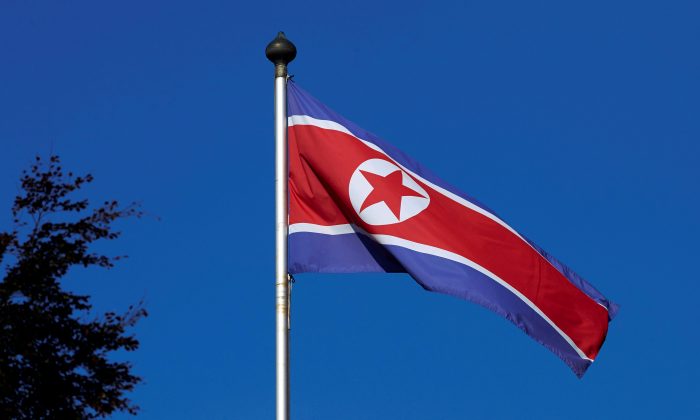 A North Korean flag flies on a mast at the Permanent Mission of North Korea in Geneva on Oct. 2, 2014. (REUTERS/Denis Balibouse/File Photo)
Asia & Pacific

China on Friday denied reports it has been illicitly selling oil products to North Korea after U.S. President Donald Trump said he was not happy that China had allowed oil to reach the isolated nation.

Trump said on Twitter the previous day that China had been “caught” allowing oil into North Koreaand that would prevent “a friendly solution” to the crisis over North Korea‘s nuclear and missile programs that it conducts in defiance of heavy U.N. Security Council sanctions.

“I have been soft on China because the only thing more important to me than trade is war,” Trump said in a separate interview with The New York Times.

South Korea said on Friday it had seized a Hong Kong-flagged ship suspected of transferring oil to North Korea.

A senior South Korean foreign ministry official said the ship, the Lighthouse Winmore, was seized when it arrived at a South Korean port in late November.

“It’s unclear how much oil the ship had transferred to North Korea for how long and on how many occasions, but it clearly showed North Korea is engaged in evading the sanctions,” the official told Reuters.

South Korea‘s customs service concluded that the Lighthouse Winmore had loaded about 14,000 tons of Japanese refined petroleum products in South Korea on Oct. 11, reportedly bound for Taiwan, the official said.

But instead, it transferred as much as 600 tons to the North Korea-flagged Sam Jong 2 on Oct. 19 in international waters between China and the Korean peninsula, on the order of its charterer, Billions Bunker Group Corp., based in Taiwan, the ministry official said.

It was not immediately possible to find contact information for the company.

A spokesman for Taiwan’s presidential office, Alex Huang, said the company was not incorporated in Taiwan.

“As a responsible member of international society, Taiwan will continue to fully comply with all U.N. sanctions against North Korea, in order to support peace and stability in the region,” he said in a statement.

The Hong Kong government said it was “liaising with the Korean parties concerned to obtain further information about the incident, and will take appropriate actions as necessary”.

Employees at the office of Lighthouse Ship Management, the ship’s registered manager, in the Chinese port city of Guangzhou, declined to comment and said they had no knowledge of the situation.

China’s foreign ministry spokeswoman said she did not have any information about the matter.

Both ships were among 10 vessels the United States has proposed that the U.N. Security Council should blacklist for transporting banned items from North Korea, documents seen by Reuters this month showed.

China and Russia have asked for more time to consider the U.S. proposal.

The Trump administration has led a drive to step up global sanctions on North Korea and the U.N. Security Council last week unanimously imposed new sanctions in response to Pyongyang’s Nov. 29 test of an intercontinental ballistic missile (ICBM).

Those sanctions seek to further limit North Korea‘s access to refined petroleum products and crude oil and Washington says the full cooperation of China, North Korea‘ main trading partner, is vital if this peaceful pressure campaign is to succeed.

It has warned that all options are on the table, including military ones, if sanctions fail.

U.S. Defense Secretary Jim Mattis was asked by reporters on Friday whether the U.S. Navy might become involved in seizing vessels suspected of transferring oil to North Korea.

He said he would not speculate on future operations but added: “Obviously if a government finds that there is a ship in their port conducting trade that was forbidden under the U.N. Security Council resolution, then they have an obligation and so far we have seen nations take that obligation seriously.”

In September, the Security Council put a cap of 2 million barrels a year on refined petroleum products exports to North Korea.

The latest U.N. resolution seeks to ban nearly 90 percent of refined petroleum exports to NorthKorea by capping them at 500,000 barrels a year.

It also caps crude oil supplies to North Korea at 4 million barrels a year and commits the Security Council to further cuts if North Korea conducts another nuclear or intercontinental ballistic missile test.

Ship tracking data in Thomson Reuters Eikon shows that the Lighthouse Winmore has mainly been doing supply runs between China and Taiwan since August.

Prior to that, it was active between India and the United Arab Emirates. In October, when it allegedly transferred petroleum products to the North Korean ship, the Lighthouse Winmore had its tracking transponder switched off.