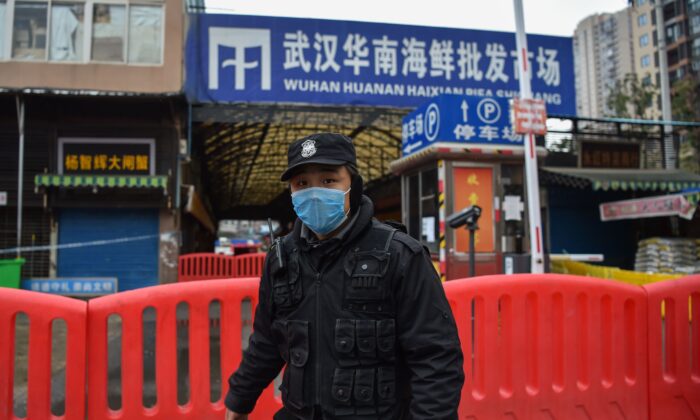 A police officer stands guard outside of Huanan Seafood Wholesale market, where vendors were infected with SARS-CoV-2, was detected in Wuhan, China on Jan. 24, 2020. (Hector Retamal/AFP via Getty Images)
Pandemic Ties to CCP

Despite comprehensive testing at the Wuhan Huanan Seafood Market (HSM), the origin of the SARS-COV-2 virus remains indeterminate.

Chinese researchers tested 1,380 samples collected in early 2020 from the HSM environment and some of the animals within the market and concluded that SARS-COV-2, the causative agent of COVID-19, was prevalent.

Seventy-three “environmental samples tested positive for SARS-CoV-2 and three live viruses were successfully isolated” which “shared nucleotide identity of 99.980 percent to 99.993 percent with the human isolate HCoV/Wuhan/IVDC-HB-01,” and “no virus was detected in the animal swabs,” the researchers reported in a non-peer-reviewed paper that was published on Research Square on Feb. 25. “In summary, this study provided convincing evidence of the prevalence of SARS-CoV-2 in the Huanan Seafood Market during the early stage of COVID-19 outbreak.”

From this result, the researchers believe that the viruses in the market could have been brought there by human beings who were infected with the SARS-COV-2 somewhere else.

One day later, a group of 18 researchers from the United States, UK, Netherlands, Australia, and Belgium published a paper on Zenodo on Feb. 26, in which they analyzed the COVID-19 patients’ locations in December 2019, and found “by combining spatial and genomic data, we show that both the two early lineages of SARS-CoV-2 have a clear association with the Huanan market.”

The Western researchers believed that the sellers of the live animals, such as raccoon dogs, rhizomys (a genus of rodents), badgers, and masked palm civets, were infected with the virus from the mammals, and then spread it to others in Wuhan city.

The Huanan Seafood Market (HSM) used to be the largest seafood wholesale market in Central China, with about 678 stalls selling meat, seafood, other foods, as well as wild animals. In late 2019, several sellers and their relatives were sick with pneumonia symptoms. The Chinese regime confirmed in late January 2020 that they were infected with SARS-COV-2, or CCP (Chinese Communist Party) virus.

A group of 38 Chinese researchers, led by virologist and immunologist George Gao, director of China CDC and dean of the Savaid Medical School of the University of Chinese Academy of Sciences, with members from China, Shanghai, and Public Health Agency of Canada wrote a paper titled “Surveillance of SARS-CoV-2 in the Environment and Animal Samples of the Huanan Seafood Market,” the researchers first explained that scientists have proposed that bats might be the original source of the virus, and pangolins might be the intermediate hosts.

However, HSM didn’t trade in bats or pangolins between May 2017 and November 2019, the paper quoted a Chinese study.

From Jan. 1, 2020, to Mar. 30, 2020, researchers from China CDC, Hubei Provincial CDC, and Wuhan Municipal CDC, went to HSM and collected 923 environmental samples inside and around the market, and 457 animal samples that included animal bodies, stray animals, and animal feces.

The results show that all animal samples were SARS-COV-2 virus free.

For the 64 positive samples from inside HSM, 56 or 87.5 percent of them were from the west zone, and all types of vendor stalls, including cold-chain products, aquatic products, seafood products, poultry, livestock, wildlife products, and vegetables.

Because the researchers didn’t find any animal sample that tested positive to SARS-COV-2, they couldn’t do more research in this direction.

China CDC researchers said that the Chinese regime disinfected HSM several times in January and February 2020, and cleaned all stalls in early March 2020. The samples were taken both before and after the disinfection.

Furthermore, the first COVID-19 patient related to the HSM that the Chinese regime announced started to show symptoms in early December 2019. The incubation period of COVID-19 is estimated to be 2 to 14 days with a median of five days, according to the U.S. Centers for Disease Control and Prevention (CDC).

According to the U.S. CDC, a 99 percent reduction in infectious SARS-CoV-2 and other coronaviruses can be expected under typical indoor environmental conditions within 3 days (72 hours) on common non-porous surfaces like stainless steel, plastic, and glass.”

Scientists from around the world still don’t agree on where and when SARS-CoV-2 was first transmitted to a human being, and whether patient zero was infected with the virus from an animal or even the type of animal implicated in such a transmission.

According to Johns Hopkins University’s statistics, over 444 million people have been infected with SARS-CoV-2 by March 5, and 5.99 million died.