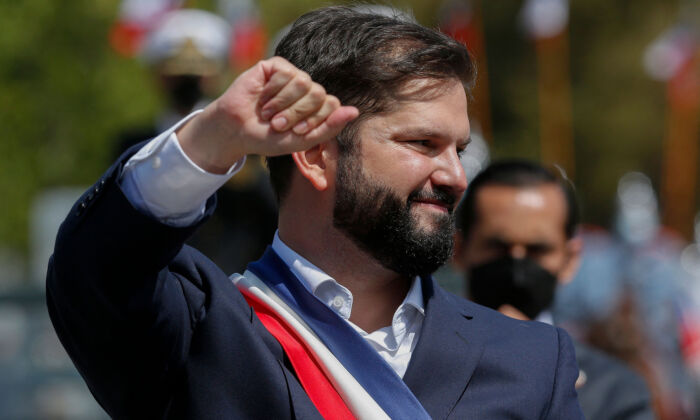 When Gabriel Boric, head of the left-wing Social Convergence party, became Chile’s youngest president on March 11, his supporters and opponents knew he would be a herald of change.

At 36, the former student union leader and chamber of deputies member is the youngest president in the nation’s history. Boric, who won a runoff election against right-wing rival José Antonio Kast on Dec. 19, 2021, has strong ties to the country’s Communist Party, which created a stir during his campaign.

Boric’s connections to Chile’s youth and protest culture aided in his victory, as many voters saw him as a symbol of social change and the start of a new era of income equality.

However, after less than a month in office, some actions that have transpired under the new administration have astonished people.

On March 25, an unarmed student protester was shot in the chest in Santiago during an anti-government demonstration.

Further, Boric designated the leader of the Chilean Communist Trade Union, Barbara Figueroa, as the nation’s ambassador to Argentina before his planned state visit to the neighboring country on April 5.

During the March 25 protest in which the 19-year-old man was shot, Boric was faced with a harsh reality beyond mere campaign promises and the first anti-government demonstration in which he was on the other side of the picket line.

Chants of “Boric, listen, join the fight” were heard from crowds of demonstrators that filled the streets outside the presidential palace of La Moneda.

The dissenters, most of whom were university students, were demanding an increase in the amount of money on state-subsidized food cards for the Higher Education Food Scholarship program, which hasn’t been modified since being set at $40 a decade ago.

In 2019, a series of nationwide demonstrations erupted in response to a proposed small increase in metro fares, resulting in multiple violent clashes with police that left almost 30 people dead.

After the United States, Chile has the most expensive private university system of any member country in the Organisation for Economic Co-operation and Development.

Along with a lack of financial aid, low wages, and the second-highest cost of living in Latin America, government subsidies and public transportation are common themes behind protests.

Boric ordered a formal investigation into the March 25 shooting and ordered the ministers of education and health to meet with the victim, who was hospitalized in Santiago.

“As a government, we must protect public order always attached to the unrestricted respect for human rights,” a spokesperson for the public ministry said. “The public ministry will initiate an investigation … in order to clarify the serious circumstances that occurred today.”

Meanwhile, the political backlash was swift over the appointment of Figueroa to the important office of ambassador, leaving some officials questioning the reason behind placing an underqualified communist trade union leader in such an important role.

Former presidential candidate Kast was candid in his thoughts.

“It’s absurd. They do it to change the focus of attention, and then they will say that it was never true,” he wrote on Twitter.

Echoing that sentiment, Sen. Felipe Kast claimed that Boric appointed Figueroa as an ambassador as a “consolation prize for friends” after his election win, pointing to the head of state’s campaign promise not to appoint officials who don’t have the requisite skills for a government job.

The La Moneda Press Office didn’t respond to a request for comment by press time.