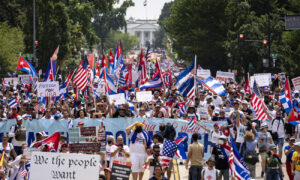 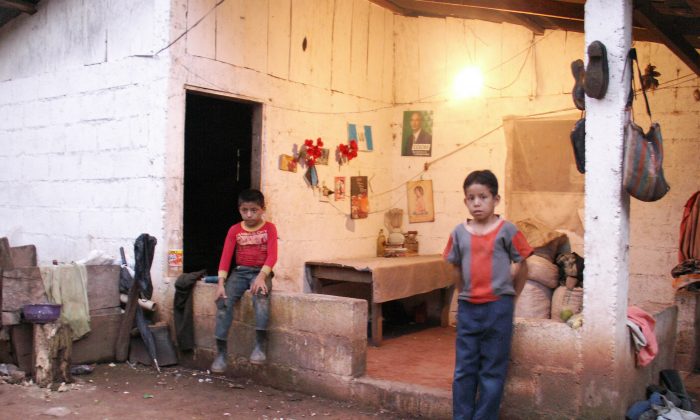 Children in a remote community of Guatemala where internally displaced people are resettled. (Courtesy of Internal Displacement Monitoring Centre)
Americas

Violence from organized crime displaces tens of thousands of people each year in the Northern Triangle of Central America—El Salvador, Guatemala, and Honduras—and children are some of the biggest victims, suffering the effects long after being driven from their homes.

Street gangs, drug runners, and Mexican drug cartels, are the prime drivers of internal displacement—people forced to leave home but who remain in the country, according to a recent report by the Internal Displacement Monitoring Centre (IDMC) (pdf).

For example, the report found that in El Salvador criminal violence has caused trauma, depression, and anxiety in children growing up there.

“There have been some cases of very early recruitment—9, 10, 11 year olds,” Valderrama said.

Child involvement in gang activity can range from directly engaging in criminal acts, like killing and robbery, to working indirectly as scouts or messengers, he added.

The criteria for entry to a gang may be to kill a certain number of people—”I’ve heard the figure of five. I don’t know if that’s an established rule, but that’s the figure that keeps coming back.”

This is easily done in the NTCA, where guns are easy to come by, Valderrama said.

Socio-economically, gang involvement limits children’s school attendance, which lowers the skill levels of the workforces in their respective countries, he added.

from direct [leads] to more poverty and … [feeds] this cycle of having to resort to violence to generate an income.”

In addition, security forces in high-risk areas harass young people and carry out nighttime raids in which they suddenly take people away, according to the IDMC report.

This can traumatize the children who witness this, causing ongoing fear and nightmares.

From Internal Displacement to Cross-Border Flight

In El Salvador, children will move repeatedly to evade gang activity. In some cases, they eventually leave the country to avoid being found within the vast networks that many gangs have, Valderrama said.

The country’s law enforcement amplifies this situation by not tackling gang violence.

In cases of extreme corruption, police have even exposed the identity of people trying to report crime committed by gangs, he added.

The number of unaccompanied alien children entering the United States from the NTCA is directly linked to the level of violence in the region, according to a 2017 study by the Center for Global Development (pdf).

The U.N. Office on Drugs and Crime attributes (pdf) the high incidence of criminal violence in Central America to the increase in cocaine trafficking since 2006. Trafficking routes began to shift from Mexico to Central America after the Mexican government’s crackdown on trafficking activity.

Aside from violence,  poverty also influences unaccompanied alien children migration, according to the Center for Global Development study:

“[Unaccompanied alien children] migration is much higher in municipalities with lower poverty rates, all else equal.”

While this may seem counterintuitive, the study explains that poorer residents are less likely to leave since they have less access to credit and smuggling networks to get out of the country.

According to Valderrama, the first step to addressing the issue is for NTCA governments to recognize the phenomenon of internal displacement due to criminal violence. El Salvador has shown some positive signs of action in this regard.

Civil society organizations, including human rights advocate, Cristosal, have brought victims’ cases to the Constitutional Court of El Salvador. The court determined the state should protect people displaced by criminal violence and gave the government six months to come up with legislation to help victims.

“This makes visible the hundreds of thousands of victims of violence in El Salvador,” Julio Magaña, Strategic Litigation Coordinator at Cristosal, said in a statement.

Conversely, there have also been examples of governments less concerned with the plight of citizens affected by criminal violence.

Valderrama said that when he and the team of researchers were presenting their findings, they were repeatedly questioned about investments the Honduran government is making in weaponry and armament.

The implication being “that the government was not properly allocating resources where it mattered,” such as to education and civil protection.

“As a result of it you would observe a higher likelihood of people either being recruited or targeted by the gangs,” he added.