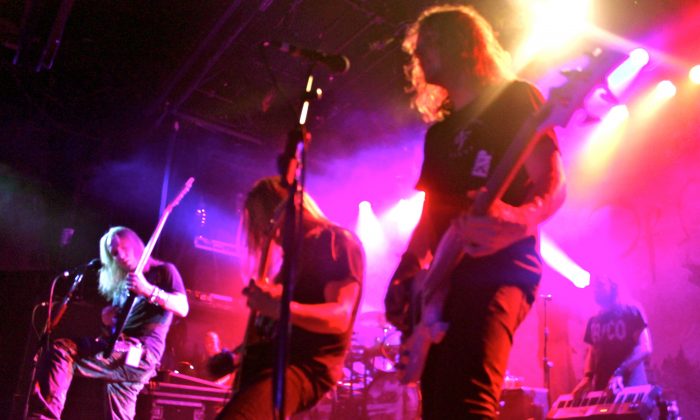 Children Of Bodom Plays First of Two Shows in NYC

Children of Bodom rocked Irving Plaza Friday night in the first of two consecutive shows at the venue as they reach the final leg of their Halo of Blood North American tour.

They opened up with the appropriately titled “Sixpounder” and never showed signs of slowing down. The relatively small crowd at Irving Plaza went insane as they blasted tracks from their older albums like “Lake Bodom,” “Downfall,” and “Towards Dead End.”

Frontman/guitarist Alexi Laiho showed off his remarkable playing skills, particularly on “Hate Crew Deathroll.” and “Angels Don’t Kill” that has landed him on endless lists of the best guitarists in rock and metal.

The band also played “Halo of Blood,” “Scream For Silence,” and “Dead Man’s Hand on You” from their latest record Halo of Blood.

Along for the heavy hitting ride included thrash metal veterans Death Angel and Faroe Island natives TYR who have developed an unique Viking metal sound and recently released a concept album that goes in depth about the life of a nameless Viking warrior.

After Children of Bodom teased the overly animated crowd by leaving the stage for a minute, they came back to perform “In For Face” for their encore to the crowd’s delight.

Once the band finishes up with Saturday’s show in New York City, they will be embarking on a world tour that kicks off on April 22 in Russia.