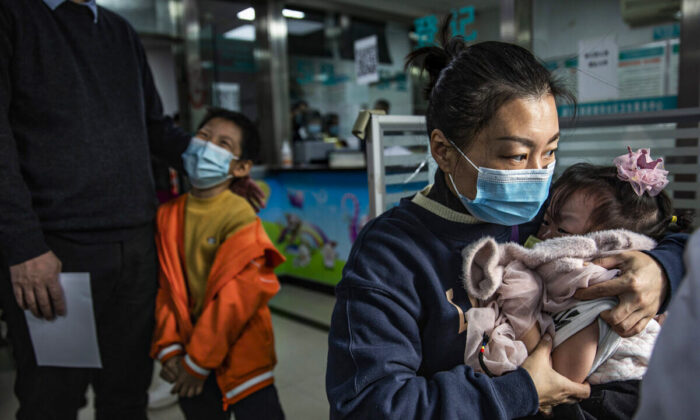 Children prepare to receive a vaccine against COVID-19 at a vaccination site in Wuhan, China, on Nov. 18, 2021. (Getty Images)
Vaccines & Safety

Children in China Diagnosed With Leukemia After Taking Chinese Vaccines

After receiving an initial dose of the COVID-19 vaccine, Li Jun’s 4-year-old daughter developed a fever and began coughing, which quickly subsided following intravenous therapy at a hospital. But after the second shot, the father could tell something was wrong.

Swelling appeared around his daughter’s eyes and lingered. For weeks, the girl complained about pain in her legs, where bruises started to emerge seemingly out of nowhere. In January, a few weeks after the second dose, the child was diagnosed with acute lymphoblastic leukemia.

“My baby was perfectly healthy before the vaccine dose,” Li (a pseudonym), from China’s north-central Gansu Province, told The Epoch Times. “I took her for a health check. Everything was normal.”

He’s among hundreds of Chinese that belong to a social media group whose members claim to be suffering from or have a household member suffering from leukemia that developed after taking Chinese vaccines. Eight of them confirmed the situation when contacted by The Epoch Times; names of the interviewees have been withheld to protect their safety.

The leukemia cases span different age groups, and are from all parts of China. But Li and others particularly point to a rise in youngest patients in the past few months, coinciding with the regime’s push to inoculate children 3 to 11 years old beginning last October.

Li’s daughter had her first injection in mid-November at the request of her kindergarten. She is now receiving chemotherapy at the Lanzhou No. 2 People’s Hospital, where at least 20 children are being treated for similar symptoms, most of them between the age of 3 and 8, according to Li.

“Our doctor from the hospital told us that since November, the children coming to their hematology division to treat leukemia have doubled from the previous years’ number, and they have a shortage of beds,” he said.

Li said that at least eight children from Suzhou district, where he lives, have died recently from leukemia.

The hospital’s hematology division couldn’t be immediately reached for comment.

Roughly 84.4 million children in the 3 to 11 age group have been vaccinated as of Nov. 13, according to the latest figures from China’s National Health Commission, accounting for more than half of the population in that segment.

There was some resistance from Chinese parents when the campaign to vaccinate children began. They expressed concern about the lack of data about the effects on young people of vaccines supplied by two Chinese drugmakers, Sinopharm and Sinovac. They reportedly carry an efficacy rate of 79 percent and 50.4 percent, respectively, based on available data from trials conducted on adults.

Information is limited about the health effects of these vaccines on children, and the World Health Organization said in late November that it hasn’t approved the two vaccines for emergency use in children.

Parents who were reluctant to vaccinate their children have faced pressure to comply, with some saying they lost work bonuses or were pressured by their supervisors. In other cases, their children faced punishment varying from losing honors or even being barred from attending school, as in the case of Wang Long’s 10-year-old son.

“The school told us last year to take him for vaccination on such and such date, or he couldn’t go to class,” Wang, from China’s Shandong Province, told The Epoch Times.

The boy received his second dose on Dec. 4. A month later, he began experiencing fatigue and a low fever. He is now at Shandong University Qilu Hospital, being treated for acute leukemia that was diagnosed on Jan. 18.

Mu Rongxue, a 75-year-old public health activist, has been pressing authorities since the start of the inoculation drive to make public clinical data relating to the vaccine’s effects on children, such as infection, hospitalization, and death figures; his request was refused.

“The data you requested requires administrative agencies to process and analyze existing government information, and will not be provided,” the National Health Commission said in a Nov. 12 letter, according to a screenshot that Mu posted online.

While he has repeatedly tried to file a lawsuit against the agency, the Beijing Municipal High People’s Court has so far taken no action on his case, at one point telling him that if they accept his case, “it would impact pandemic control efforts,” according to Mu.

“If I don’t have evidence, you can sentence me to life or even death, but why are you afraid of my lawsuit?” he wrote in a post on China’s microblogging site Weibo last month.

On WeChat, the all-in-one Chinese social media platform, Li has come to know more than 500 patients or their family members who share the same predicament.

The local disease control center, when called by Li and others, had promised an investigation. But these probes invariably ended with the officials declaring the leukemia cases as “coincidental” and thus unrelated to the vaccines.

The authorities had said the same following the deaths of more than a dozen toddlers after Hepatitis B shots in 2013.

But Li and others in a similar situation are far from convinced.

“I dare say they didn’t do any verification, but only went through the motions,” he said.

Li suspects that authorities are giving him the runaround. Officials told him a panel of experts would start an investigation within his province, but when he called the provincial level health agency, they disavowed any knowledge, saying reports of the cases had never reached them.

Li and others seeking scrutiny of this issue also stand little chance of having their voices heard in the vast Chinese censorship machinery, which constantly filters out anything deemed harmful to the communist regime’s interests.

“The information gets blocked the instant we try to post something online. You can’t send it out,” he said.

When China’s two top political bodies met last week for its most important annual gathering in what Beijing called the “Two Sessions,” Li pitched in the WeChat group the idea of petitioning in the capital to get officials’ attention.

“The police called us one by one,” said Li. “They said we have made things up and ordered us to withdraw from the chat group.”

The group was soon disbanded. An information sheet containing details of more than 200 leukemia patients, filled out by members of the group, is no longer accessible.

According to Li, there are signs indicating that authorities are well aware of the issue. Doctors, when receiving patients with similar symptoms, would first ask them if they had taken the vaccine, he said, citing information he learned from the WeChat group.

“’Got it,’ they would say. And that’s the end of it,” he said of the doctors’ questioning.

Li got the same reaction when calling the hotline for Chinese state broadcaster CCTV in hopes of getting media exposure.

“As soon as we said the children had taken the COVID-19 vaccine, they asked me if she had gotten leukemia. They knew,” he said. “They said that they got too many calls because of this.”

Wang, whose 10-year-old was diagnosed with leukemia, is the sole breadwinner for his family and is already under strain making mortgage payments. He received about only 1,000 yuan ($157) through the state social assistance program to help pay for his son’s treatment.

“I stayed at the hospital until 4 a.m. the night before,” said Wang, adding that the crushing news has “broken” the boy’s mother.

“Had he inherited it from the family, we’d accept it as our lot,” Wang said. “But he got sick because of the vaccine. I just can’t reconcile it.”

Li, meanwhile, has been borrowing money from relatives for the hospital fees. Some of the money trickles in as 20 and 30 yuan, the equivalent of a few dollars, he said.

Li has heard nothing from officials or the media, and his friend who works at the local health commission overseeing the distribution of vaccines has told him not to hold out much hope.

“The officials knew that you could get leukemia, but ‘the arm is no match for the thigh,’” the friend told him, recalling a Chinese metaphor. “This is a national issue.”