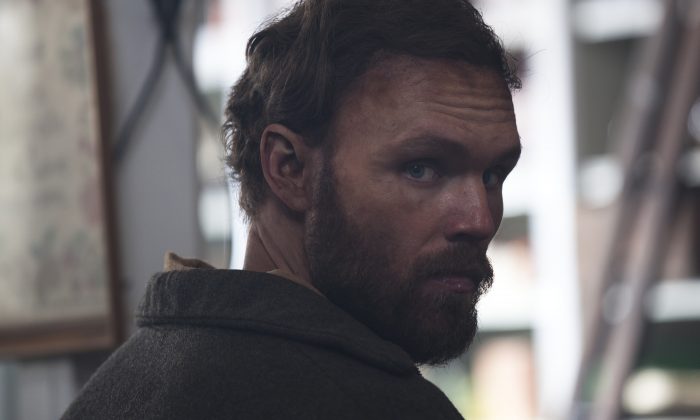 ‘Child of God’: A Rural Version of ‘Psycho’

Who’s Ed Gein? We know Ed from horror-film treatments. “Psycho,” “Texas Chainsaw Massacre,” and “Silence of the Lambs” were all “inspired” by Ed’s unholy life.

Gein’s was a strange destiny. His mission, apparently, was to haunt our collective dreams in these end times, with a blistering example of just how low a human can go. He was a nocturnal exhumer of coffins, a manufacturer of metatarsal trinkets, and a wearer of scalp-wigs.

Be forewarned: This film’s got pretty much every nasty, sick, low, bestial, vomit-inducing thing a human being is capable of, illustrated in stark relief, by the immensely brave newcomer actor Scott Haze.

The stage is set in Appalachian Tennessee in the 1960s. Lester’s the local lunatic except he’s not mentally disabled, just driven mad by early parental bereavement, neglect, and prolonged loneliness. His father killed himself, and he was never right again.

“Child of God” could have also been titled “It Takes a Village.” To raise a child, that is. One of the cruelest punishments for humans is solitary confinement. Isolation is damning to humans.

Looking like a strange mixture of caveman and matted-haired male model, he storms onto the scene where his inheritance (his family house and land) is being auctioned off. Helpless to do anything but snarl, curse, and make empty threats with his ever-present rifle, he’s cowed to a frothing but impotent rage by the unyielding local men-folk.

He retreats into the mountain wilderness, holing up in a wooden shack, replete with shipping pallets and a salvaged filthy-mattress bed. The cold is palpable.

Lester bites the heads off live bobwhite quails, shoots fish, steals chickens, and blasts cows. For entertainment, like a two-decades-early Son of Sam, he sneaks up on unwitting teenagers making out in parked cars. Except, instead of blowing couples away with a .357 Magnum, he just watches. Sort of.

One day, Lester finds the dead bodies of two young lovers in a car, who may or may not have not committed suicide by carbon monoxide poisoning. Not being a married man, Lester decides to take himself a “wife.”

Though all of what follows is unspeakable, it’s played largely from a place of loneliness, which ultimately allows for a modicum of compassion to buffer the horror and disgust.

Like all escalating addictions, after Lester manages to accidentally burn his shack down along with the corpse of his “wife,” he goes completely round the bend, and, like the troglodyte he already looks like, finds himself a cave to live in. Which then doubles as a morgue of sorts, to store an ever-growing collection of rifle-harvested “wives.”

Scott Haze dove headlong into a protracted method-acting siege that will burn holes in the celluloid of your mind, earn him a place at the vaunted table of Hollywood players, and continue ripping through your soul hours later, like a tumbling bullet.

Haze committed to getting Lester’s particular brand of unintelligible, Tennessee mountain dialect down. Unless one is aware of his meticulous process, it seems mostly like the primitive mutterings of an imbecile, but apparently Haze nailed it with extreme accuracy. Subtitles might have been a nice touch here.

Scientist and mystic Rudolf Steiner describes a telltale indicator of the extent of demonic presence in the human soul: the degree to which an individual tilts the forehead downward, so that the brow dips below the horizontal and the eyes rise up to glower out from under the brow ridge. Try it in the mirror. Haze utilizes this body language to great effect to portray Ballard’s demons.

However, in a haunting carnival scene where Lester reveals a stupefying talent for marksmanship, he at one point gazes with aching wonder at the face of a beautiful child.

With Lester in this peaceful state, one finally notices his stunningly handsome mountain man features. And McCarthy’s line “A child of God much like yourself perhaps” hits home.

This compassion-inducing revelation, rounded by guitars and banjos in folk and bluegrass modes throughout the movie, combined with mountain vistas, brings the mild warmth of nostalgia that turns the human horror proceedings more tragic than frightening.

Though rather visually monotonous—all browns, grays, and whites of November mountain landscapes—the action is well-paced, with tension that focuses throughout.

Director James Franco makes a cameo appearance, but he is well-entrenched here in his chosen director-niche: gritty, seldom-told tales out on the edge of humanity.

Indian philosophies maintain that due to a creeping, unnoticed, inexorable accumulation of karma, all unexamined lives will, over a period of lifetimes, eventually lead to an Ed Gein existence. Furthermore, should you ever figure out how stop the downward spiral, you should seek to end it with alacrity.

See Scott Haze channel Lester Ballad channeling Ed Gein. The experience may prompt you to run to the nearest meditation retreat (as they say in the Army) “like a scalded ape.”

Ultimately, though, the movie’s message is that community is sacred, all God’s children should be cared for, and the Lester Ballards of the world, when stranded, need a human net to save them from descent into madness.