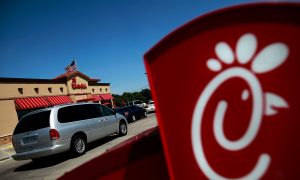 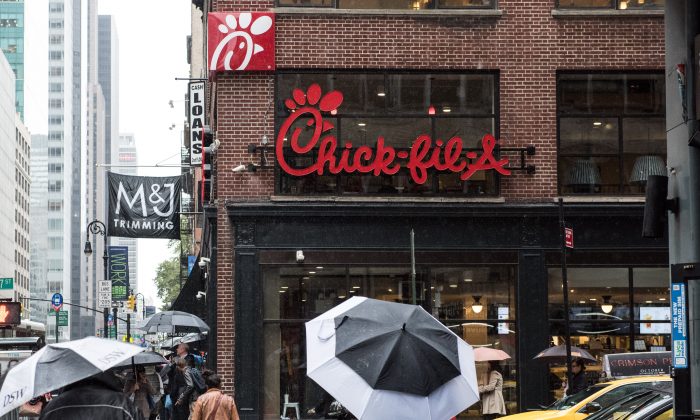 The exterior of Chick-Fil-A, a day before its opening on 37th Street and 6th Avenue in New York on Oct. 2, 2015. Andrew Renneisen/Getty Images
Viewpoints

Chick-Fil-A Protests Destroy the Credibility of the LGBTQ Movement

Just when I thought the world had hit peak crazy, I pulled up my Twitter feed to find a post featuring a video of drag queens protesting outside of a brand spanking new Chick-Fil-A that just opened in Toronto.

Cooped up at my desk at work, I saw that LGBTQ protesters participated in a “die-in” in front of the chicken restaurant, along with animal rights activists. Both groups were supposedly protesting against “hate.”

Though there were no reports of fowl play, protesters reportedly chanted, “Hey hey, ho-ho, homophobia’s got to go!” and held up signs that said “Cluck off.”

Since 2012, members of the LGBTQ community has been incensed that Chick-Fil-A CEO Dan T. Cathy confessed his belief in traditional family values—specifically that marriage should only be between a man and a woman. There was also anger after it became known that Cathy’s father—and Chil-Fil-A founder—Samuel Truett Cathy donated to Christian organizations, some of which lobby against gay marriage.

“We are very much supportive of the family—the biblical definition of the family unit. We are a family-owned business, a family-led business, and we are married to our first wives,” he said. “We give God thanks for that. … We know that it might not be popular with everyone, but thank the Lord, we live in a country where we can share our values and operate on biblical principles.”

However, in 2012, the restaurant backed away from politics and issued a statement saying, “Going forward, our intent is to leave the policy debate over same-sex marriage to the government and political arena,” which they’ve done.

Though it’s a reasonable assumption that the owners of the company remain unwavering in their adherence to Christian principles, their beliefs stay personal and don’t commingle with the service provided by their business, which is inclusive of all guests, including members of the LGBTQ community.

So, why do these protesters have their feathers ruffled?

Activists who protest Chick-Fil-A don’t seem to care about equality. They demand ideological orthodoxy and complete submission to an LGBTQ agenda that has moved far beyond the basic idea of equal treatment under the law.

These protests are not about discrimination, they’re about ideology. They’re about the pro-God culture of the company and the personal convictions of the company’s CEO. He believes that marriage is between a man and a woman. The protesters don’t. His crime is that he has the audacity to think differently than they do.

Launching boycotts and protests, in this circumstance, is the complete opposite of tolerance and the complete opposite of equality. These members of the LGBTQ community aren’t asking for equal treatment, they’re demanding “special” treatment. They’re diminishing the 60-year history of a movement that supposedly stands for love and acceptance, all while holding others to a standard they’ve fought decades against having held to them.

This latest round of Chick-Fil-A protests is a demonstration that the idea of tolerance is now a one-way street—a limited currency to be used only by some for self-gain, rather than a guiding principle equally applied to all.

So, the protesters who flocked to Toronto said they were standing up against hate? What’s more hateful than trying to shut down the business of a man who treats you as an equal, just because he disagrees with you about who should be in his bedroom?

All of this shows that the real agenda of these activists is to use force to compel people to subscribe to a specific world view, or use force to punish those who won’t.

I’m pretty sure there’s a word for that.