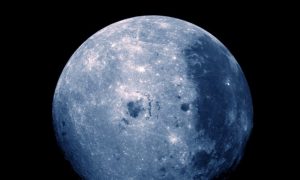 Origins of the Moon
0 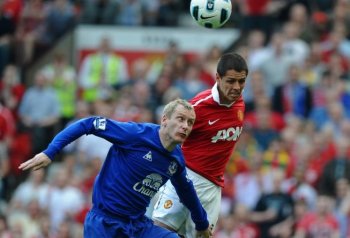 Javier "Chicharito" Hernandez scored a crucial second half goal to give Manchester United a 1–0 victory over a resilient Everton side at Old Trafford in Saturday’s early Premier League match.

With a trip to Schalke for the first leg of the Champions League semifinal to look forward to on Tuesday, squad rotation was the name of the game for United and Sir Alex Ferguson predictably rested a number of key players.

Nemanja Vidic was not even on the bench, and so the captain’s arm-band passed to Rio Ferdinand who was partnered in the centre of defense by Jonny Evans. Everton skipper Phil Neville was back at the ground where he played 11 seasons.

Tim Cahill remains Everton’s top scorer, despite having been out for a month with a foot injury. Fit again, the Australian started on the bench for the Toffees. Former United striker Louis Saha would not make an appearance against his old club as yet another injury will now keep him out for the rest of the season.

The home side predictably dominated proceedings enjoying 20 percent more possession over the course of the first half, as well as seven corners to nil and 11 shots on goal to one weak effort by Leon Osman after eight minutes.

For all United’s dominance they struggled to find that telling final ball when inside the Everton penalty area. Long-range shots from Wayne Rooney and Darron Gibson failed to find the target.

United’s best chance came in the 31st minute when Rooney fed Hernandez whose first-time shot had plenty of power but was well saved by American keeper Tim Howard. It was a crisp strike that only needed to be a yard either side of the former United keeper and he would have had no chance.

Only seven minutes later Antonio Valencia centered for Nani whose goal-bound shot hit the back of Hernandez who had fallen down in the six-yard box. Unbelievers in the crowd were starting to think that maybe it was going to be one of those days.

Everton attacks were few and far between, but on one of the rare occasions when the ball was inside the United penalty area, lone striker Jermaine Beckford might have been awarded a spot kick following a tussle with Jonny Evans. However, referee Peter Walton saw nothing wrong, presumably deciding it was six of one and half a dozen of the other, and to be fair there was barely an appeal from the Everton players.

Beckford was replaced by Victor Anichebe for the second half. Everton manager David Moyes was doubtless hoping that the physical presence and pace of the big Nigerian would present more problems for Ferdinand and Evans.

Tim Cahill was also introduced at the expense of Diniyar Bilyaletdinov. In fact the half was only 11 minutes old when Anichebe, outpacing Ferdinand into the United box, was clearly pulled back by the former England skipper, but again no penalty was given.

United were firmly in control for the most part but unable to break down a well-organized Everton back line in which Phil Jagielka was absolutely outstanding. There was one scare for the home team though, when a Jack Rodwell shot from just outside the box, deflected off the inside of Evans’s left leg and was tipped inches wide of van der Sar’s right hand post by the big Dutchman’s outstretched fingers. It was a priceless save from the 40-year-old keeper.

By this time Ryan Giggs and Michael Own had been brought on in the hope of introducing more creativity and guile into United’s attack. In the 74th minute Owen almost fashioned a goal, glancing the ball off Sylvain Distin and onto the post.

Five minutes later a curling Rooney free kick from 25 yards was well stopped by Howard. The American pulled off his best save of the match barely a minute after that when he tipped a powerful Hernandez header one handed over the crossbar.

The all important winner finally came in the 83rd minute. Antonio Valencia twisted and turned on the right wing and floated over yet another cross. Thus far, everything in the air had been comfortably dealt with by the Everton defenders, but on this occasion Hernandez found a yard of space at the far post and headed home and the Old Trafford faithful went into raptures. The 22 year-old Mexican has been the bargain buy of the season at just 6 million pounds.