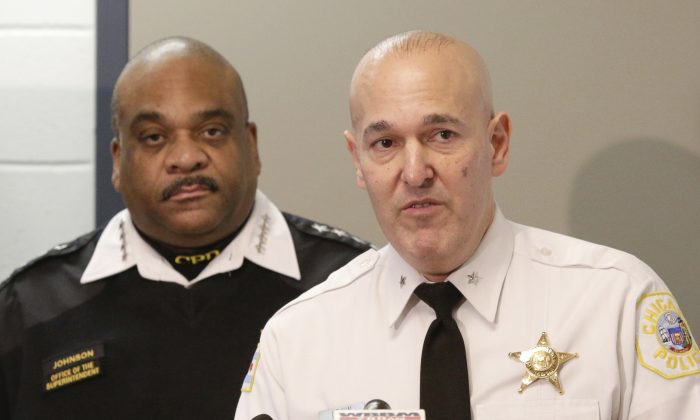 Police Superintendent Eddie Johnson demonstrated how officers will use software to almost immediately learn when and where someone has fired a gun. At the news conference in a police district considered to be one of the city’s two most violent, Johnson also showed his audience a computer system that will help police predict where violence might erupt.

Chicago has been at the center of the debate about gun violence even before it finished last year with 762 homicides—a total higher than those of New York and Los Angeles combined. With a third of those killings occurring in one neighborhood on the South Side and one on the West Side, the department decided to open its first two Strategic Decision Support Centers in those neighborhoods.

“We are changing the crime-fighting culture within the Chicago Police Department,” Johnson said, adding that he believes the technology will lead to more arrests of violent criminals and thus a reduction in the number of homicides and shootings.

Johnson was set to announce the initiatives last week but had a dizzy spell at the news conference. He later explained that he had taken blood pressure medicine on an empty stomach.

On Wednesday, he talked about how the department has expanded technology called ShotSpotter that’s being used in several major cities to help police detect when someone fires a gun. More than 100 sensors were installed in each of the two neighborhoods. Those sensors have been linked to smartphones that the officers carry and the computer screens in their squad cars—meaning that officers know within seconds that shots have been fired and almost the exact location where they came from.

Jonathan Lewin, deputy chief of the department’s technology and records group, said the results have been encouraging, pointing to a recent arrest of a man by police who were able to respond to a shooting incident in a yard. They arrested an armed man and recovered two spent shell casings.

At the same time, police have increased the number of remote-controlled cameras in the two neighborhoods. The cameras and the gun-detection technology are linked to what is called a Strategic Decision Support Center. Each of those neighborhoods’ police stations has one.

The centers each have a computer system called a HunchLab that is fed information about arrests, 911 calls, gang activity and other data and predicts where violent crime might erupt.

Lewin said the department hopes to expand ShotSpotter, which costs a total of $1 million to cover the two police districts, to other high-crime parts of the city.

Trump Tweets Warning: He’s Ready to ‘Send in the Feds’ to Chicago

Johnson and his officers are under intense pressure to reduce the number of homicides and other violent crimes. Last week, Trump tweeted he would “send in the Feds” if the city “doesn’t fix the horrible ‘carnage’ going on.”

Chicago police released statistics Wednesday that show the number of homicides increased from 50 in January of 2016 to 51 last month — the highest total since January 1999 when there were 55.

But Johnson said he’s also encouraged by statistics that show the officers this January took far more guns off the street and made many more gun arrests than they did last January.