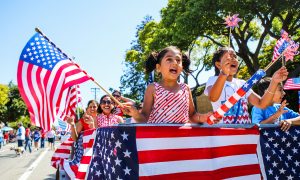 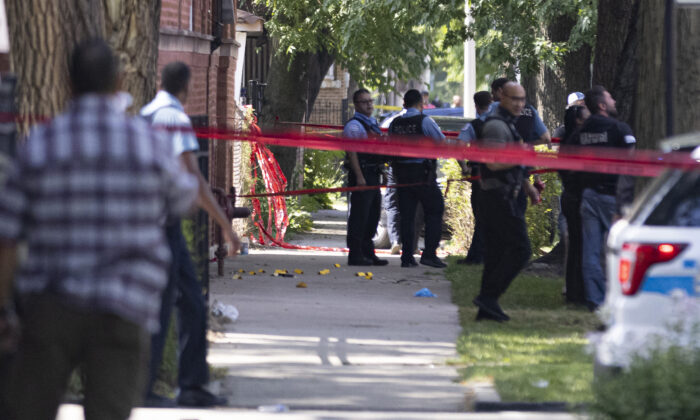 Police investigate the scene in which police opened fire during an arrest near 109 S Kilpatrick in West Garfield Park in Chicago, Ill., on July 9, 2021. (Anthony Vazquez/Chicago Sun-Times via AP)
Crime and Incidents

Chicago police fatally shot a man wanted on two warrants after he pulled a gun and pointed it at law enforcement officers as they tried to take him into custody on Friday, authorities said.

The police superintendent in the Illinois city, David O. Brown, said during a press briefing on Friday that one of the 33-year-old suspect’s warrants was for aggravated criminal sexual assault with a firearm.

His second warrant was for escaping electronic monitoring after he cut off his ankle bracelet, Brown said.

The warrant was served by multiple agencies that included Chicago police, U.S. marshals on a fugitive task force, and Cook County Sheriff’s deputies, who located the suspect, who was not cooperating, in a vehicle in the West Garfield Park neighborhood.

The shooting occurred about 9:40 a.m. after the man refused to get out of his vehicle and pulled a gun as officers moved closer to him.

“The offender produced a firearm and pointed it at officers. According to preliminary reports, three CPD officers and one U.S. marshall discharged their weapons striking the offender,” Brown said.

No officers were wounded, but the four who fired shots were taken to a hospital for evaluation, Brown said.

It wasn’t immediately clear if the suspect fired any shots.

The city’s Civilian Office of Police Accountability said officers turned on their body cameras during the shooting. The video will be released within 60 days.

“It’s a very dangerous time to be in law enforcement,” Brown. “These officers face death day in and day out to protect the people of Chicago. There is no regard for law enforcement’s presence.”

Investigators said the suspect was wanted on 15 counts of aggravated sexual assault with a firearm, as well as the electronic monitoring violation.