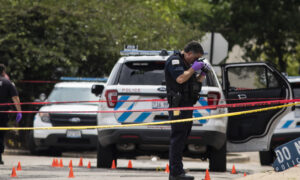 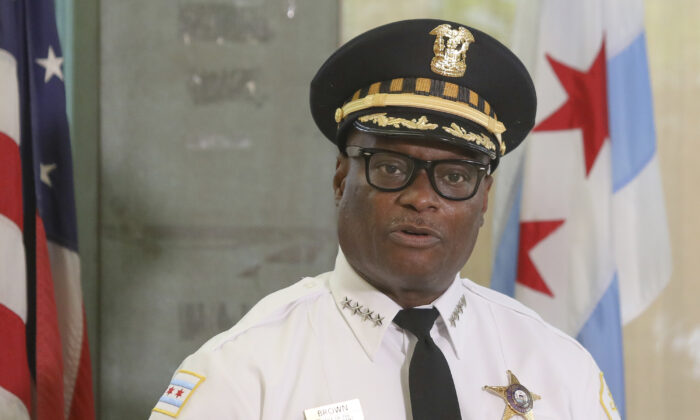 Fourth officer shot in one week
By Zachary Stieber
Print

Several officers responded to a domestic violence report at 3:30 a.m. When they arrived, the suspect was on the third floor “peering out the window” at them. Officers started talking with him from the ground level, trying to deescalate the situation.

“But almost immediately the suspect began firing at the officers from a handgun down on ground level from the third floor, striking one of our officers in the leg,” Brown told reporters outside Mt. Sinai Hospital, where the officer was in serious condition.

Officers did not return gunfire. Instead, they went up to the apartment and apprehended the suspect, who was described as a felony gun offender with criminal history.

The man’s partner and a child were inside. Both are doing okay, Brown said.

The officer hit by the bullet was the fourth struck by gunfire from suspects this week alone.

“It just speaks to the courage, bravery, and dedication of the Chicago Police Department and its officers during this unprecedented time and challenging time with not only with the pandemic and civil unrest but also the push against police, and yet our officers are continuing to risk everything to protect their city,” Brown said.

Shootings have skyrocketed this year in Chicago. As of Aug. 2, the city saw 1,804 shooting incidents, up from 1,220 through the same date last year.

July was the most violent month in the last 28 years, local news outlets reported.

“The last time we had one of these episodes in 2016, it went on for a while. It went on for almost a year or more in some places,” Kapustin said.

“In the long run, it can happen. We saw it happen in New York and Chicago and other cities in the 1990s. Crime can go down. The difficult thing is knowing what exactly to invest in to do that,” he added.

Police officials have blamed the rise in violence on the release of violent criminals and an electronic monitoring program they say doesn’t work well.

Chicago Mayor Lori Lightfoot said last month the COVID-19 pandemic was one of the causes.

“The ecoystem of public safety that isn’t just law enforcement, that is local, community-based, they, too, have really been hit hard by COVID, and they are just now coming back and getting their footing,” she said during an appearance on CNN.