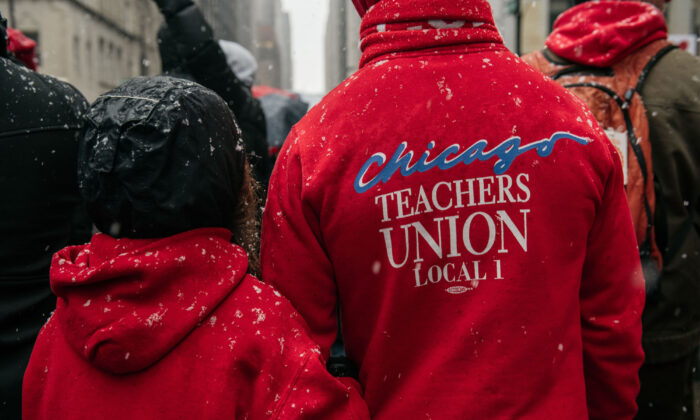 Chicago public school teachers marched through the streets near City Hall during a strike in Chicago, Ill., on Oct. 31, 2019. (Scott Heins/Getty Images)
US News

Chicago has again put off the plan to bring students back to classrooms as the nation’s third largest public school district failed to reach an agreement with its teachers’ union to reopen schools that have been closed for almost a year.

In a statement posted on Twitter late Wednesday evening, Chicago Public Schools (CPS) told the families of nearly 70,000 K-8 students that they would have to continue remote learning at home on Thursday. Friday is already scheduled as a no-school day, which means students won’t be able to learn in-person until at least next Monday.

The district also extended the “cooling off period” for another 24 hours, during which no additional disciplinary action would be taken against teachers who, backed by the Chicago Teachers Union (CTU), refuse to return to in-person work.

“We are disappointed to report that at this time, no deal has been reached between CPS and the Chicago Teachers Union leadership,” the district said in the statement.

The CPS called an initial 48-hour cooling off period last week, in an effort to give the two sides more time to negotiate, with the district backing off threats to lock out teachers and the union ceasing threats for a strike. There’s yet to be an agreement as of Thursday.

According to the CTU, the school district has balked at some of their key demands, such as adopting Centers for Disease Control and Prevention (CDC) health metrics to decide when schools should reopen and close. Other rejected demands including a phased reopening of schools with at least 1,500 teachers receiving vaccinations each week, rapid testing of teachers and students on a weekly basis, and accommodations for teachers with health issues and those with a family member who has health issues.

Chicago Mayor Lori Lightfoot on Thursday once again pressured the CPS and CTU to get the deal done, saying that she is running out of patience.

“We waited for hours last night—hours—and still did not receive a proposal from the Chicago Teachers Union leadership,” Lightfoot, a Democrat, said at a press conference. “And as of this morning, we are still waiting—but to be clear, not patiently, not anymore.”

The announcement comes as high-ranking Centers for Disease Control and Prevention officials recommended that schools reopen with safety measures, such as face coverings and social distancing. The agency’s director, Rochelle Walensky, told reporters on Wednesday that vaccinating teachers is “not a prerequisite for safe reopening of schools” and that there is “increasing data to suggest that schools can safely reopen.”