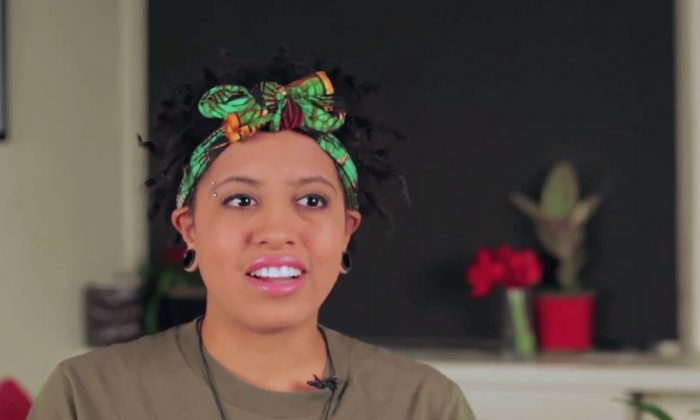 Chiara de Blasio speaks about her struggle with clinical depression, drugs, and alcohol in a video made public on Tuesday. (Screen shot of video/Transition NYC)
New York

Wearing tunnel earrings, a bright green headband, and flashing a radiant smile, the daughter of the city’s mayor elect, Bill de Blasio, said that she drank alcohol and took drugs to deal with clinical depression and to “share common ground with people.”

The habit was still a major problem for the 19-year-old when she moved to the West Coast to attend college. “I thought that all my problems would go away if I just got on a plane and flew 3,000 miles,” she said.

Despite the sour revelation, the video offered hope. With the help of her parents, her therapist, and a treatment program, de Blasio said she overcame her addictions. Now she is using her story to help others.

“Removing substances from my life—it’s opened so many doors for me,” she said. “I was actually able to participate in my dad’s campaign. It was the greatest thing ever.”

Chiara’s revelation is a great step forward in the struggle against substance abuse, according to Jamison Monroe, CEO of Newport Academy, a teen mental health and substance abuse treatment center in western Connecticut.

“I think one of the biggest issues is the stigma of mental health and substance abuse,” Monroe said. “To have the daughter of an elected official, the mayor-elect of New York, come out and be honest and upfront about an issue that she is struggling with is a huge step.”

According to the U.S. National Institute of Alcohol and Substance Abuse, 28 percent of Americans drink at levels that put them at risk of alcohol dependence. Some 3.1 million Americans need treatment for a substance abuse problem, according to the National Survey on Drug Use and Health.

As the above facts flashed throughout the video, set to dramatic piano music, de Blasio spoke of how fast she had to grow up in New York City. Her tale is similar to other teens of successful and famous parents who seek help at Newport Academy, Monroe said. Teens like de Blasio speak of the pressure to excel in the big city, which is even greater for those whose parents are in the public spotlight.

Meanwhile, the ease of access to alcohol and drugs in New York City is infamous among teenagers, who often tell Monroe that they routinely travel to the city from the suburbs to buy drugs. “You can get anything on Union Square,” one teen told Monroe.

Substance Abuse and the Tale of Two Cities

De Blasio’s tale touches on a social ill that taints both of the mayor-elect’s “Two Cities.” Substance abuse treatment programs are expensive. Most low-income families could only afford such a program through health insurance.

“One thing that New York can do is to help enforce insurance coverage payments from insurance companies for mental health treatment,” Monroe said.

De Blasio said that quitting drugs and alcohol was the most difficult thing she has ever done.

The help she needed came from people like her in the treatment program. Her message to others who struggle with depression and addiction was to reach out for help.

“I wanted to speak out because people are suffering from this disease and dying from this disease every day. You can’t do sobriety on your own,” she said. “You really just have to keep on relying on those who have been there, finding people that have gone through it, being honest, open and willing, and you will see the most immense change that you’ve ever seen before.”