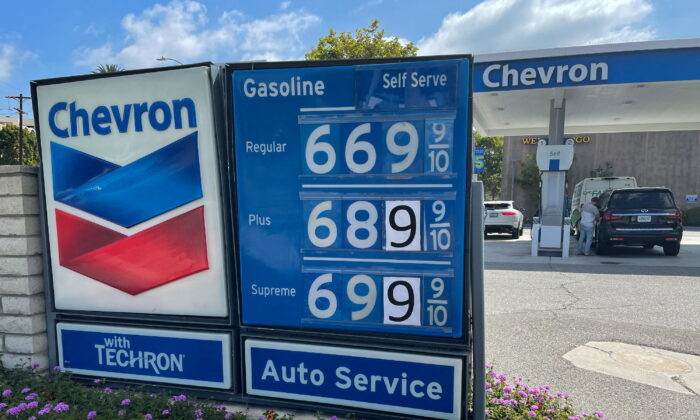 Gas prices are advertised at a Chevron station as rising inflation and oil costs affect the consumers in Los Angeles, California, on June 13, 2022. (Lucy Nicholson/Reuters)
Energy

The chairman and CEO of energy company Chevron has warned Americans to brace for price increases in natural gas this winter.

CEO Mike Wirth made the comments in an interview with CNN on Sept. 13 in which he warned consumers that “there’s certainly a risk that costs will go up” when it comes to natural gas.

“Prices already are very high relative to history and relative to the rest of the world. We’re already seeing this impact being felt in the European economy and I do think it’s likely that Europe goes into a recession,” Wirth said.

Europe has been suffering from an energy squeeze in recent months, driven by its decision to wean itself off fuel from Russia in the wake of its invasion of Ukraine along with chronic shortages and a move by some EU countries to phase out coal.

The outlook for Europe this winter is now looking more strained after Russian state-owned energy corporation Gazprom scrapped plans to restart gas flows through its Nord Stream 1 pipeline to Germany earlier this month.

Following what was expected to be a temporary shutdown for routine maintenance, Gazprom said that it could not safely restart gas deliveries through the key pipeline until an oil leak in a critical turbine was fixed. Officials have not yet stated when gas supplies will resume through the pipeline.

While Worth noted that the situation in the United States would not be as bad as it is in Europe, the CEO stated that natural gas prices could still be “significantly higher” this winter in the former.

Last month, Energy Secretary Jennifer Granholm sent a letter to seven refiners including Valero, ExxonMobil, and Chevron, urging them not to increase exports of fuels like gasoline and diesel and instead help build domestic supplies.

Export Ban Could Have ‘Unintended Consequences’

“Given the historic level of U.S. refined product exports, I again urge you to focus in the near term on building inventories in the United States, rather than selling down current stocks and further increasing exports,” Granholm said in the letter, before noting that the Biden administration will “need to consider additional federal requirements or other emergency measures,” if the companies fail to do so.

President Joe Biden and other White House officials have also accused oil giants of slowing down production in the United States in order to keep prices high. Oil companies including Chevron have denied those claims.

When asked about the letter on Tuesday, Worth said that stopping gas exports outside of the United States would not help to bring down prices for consumers in the country.

“The risk in an action like that is that it has unintended consequences. An export ban runs the risk of taking supplies that are needed in other parts of the world and reducing those which can drive world prices up, which then can affect the price of imports into this country,” he said.

“I think there’s a risk that it could take prices up not down,” he added.