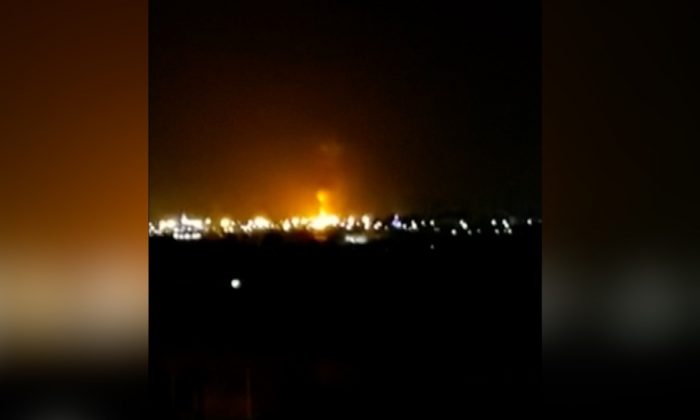 CAIRO, Egypt—Egyptian firefighters battled flames that erupted after an explosion at a chemicals factory outside Cairo‘s main airport on Thursday, with a dozen people reported injured in a blast an army spokesman said was caused by high temperatures.

State news agency MENA quoted a security source as saying that 12 people were taken to a hospital after the blast, which occurred in a storage facility belonging to a local petrochemicals company outside the airport in the northern part of the capital.

The minister of civil aviation, Younis al-Masri, said air traffic at the airport was unaffected by the explosion, which could be heard across the area.

“Due to high temperatures, an explosion happened at a petrochemicals storage belonging to the Heliopolis for Chemical Industries,” said Colonel Tamer al-Rifai, the military spokesman, in a social media posting.

“Civil defense trucks were deployed to bring the fire under control,” he added.

Rifai did not say who owned the factory, but security sources and some internet postings suggested it belonged to the armed forces.

Witnesses said ambulances and fire trucks rushed to the scene as a cloud of black smoke rose over the area.

State television said firefighters had managed to bring the fire under control.

Egypt is battling the ISIS terrorist group that has carried out attacks, mainly in the remote Sinai Peninsula, where the army has been conducting a security operation since February.

Violence appeared to have subsided in recent months, with no incidents reported in the country’s mainland outside Sinai.