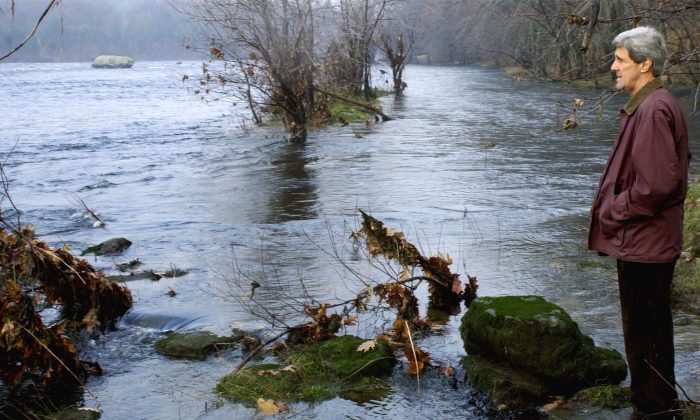 State Secretary John Kerry, then Democratic presidential candidate, at the bank of the Merrimack River in Litchfield, N.H., on Nov. 12, 2003. (Michael Springer/Getty Images)
US

LITCHFIELD, N.H.—When Tracy Madden heard her water could be contaminated with the potentially cancer-causing chemical PFOA, she started thinking about all the ailments she’s endured over the years that her doctors couldn’t diagnose.

The 49-year-old property manager from Litchfield, New Hampshire, thought back to the nerve pain that continues to nag her as well as the skin problems that won’t go away.

She’s thinking it could be tied to PFOA, a chemical in Teflon coating that Saint-Gobain Performance Plastics once used in its plant just across the river in Merrimack.

“It’s absolutely overwhelming especially when I look at health issues I have been having and am having,” said Madden, after a community meeting where she learned her street will be among those where wells will be tested for PFOA contamination.

Litchfield is just the latest in Northeast communities to be put on edge over concerns that PFOA—most likely from a Saint-Gobain plant—has contaminated the drinking water. It also has been found in wells near a now-shuttered plant in North Bennington, Vermont, as well as in the Hoosick Falls, New York, water supply, where the company has two plants.

After learning of the contamination in New York, the New Hampshire Environmental Services Department last month began testing wells within a mile of the Saint Gobain plant. So far, three wells in Merrimack and 20 in Litchfield have been found to have PFOA levels at or above 100 parts per trillion. None exceeded 400 parts per trillion, the Environmental Protection Agency’s advisory level for short-term exposure.

With scores of test results still outstanding, the state also announced that 400 properties in that area will get bottled water. It also plans on expanding testing.

The state has sent a letter to Saint Gobain saying it believes the company is “potentially responsible” for the cleanup, though DES officials haven’t ruled out other sources for the PFOA. The company bought the current plant from ChemFab in 2000 and produces building materials used to make stadium roofs there.

So far, Saint-Gobain Performance Plastics CEO Tom Kinisky told The Associated Press that its focus is on providing communities in New York, Vermont and New Hampshire with clean water. The investigation is ongoing into the source of the contamination, which Kinisky says cannot be definitively linked to the company because it was so pervasive in recent decades—used in everything from Gore-Tex jackets to ski wax to the linings of pizza boxes and microwave popcorn bags.

“We’ve been just trying to deal with the community frankly without dealing with responsibility or sources of the contamination. That hasn’t been our focus,” he said.

In Vermont, more than 100 private wells in Bennington and North Bennington were found to be contaminated with PFOA at levels greater than the state’s advisory level.

Stuart Hurt, town manager in Bennington, said people there and in North Bennington are concerned about the long-term health effects of PFOA and on the value of their properties.

“Right now we can’t answer either of those questions, as tough as that sounds,” Hurd said.

The filtration systems that have been attached to some of the affected private water systems will remove all traces of PFOA, but the equipment is bulky and the homeowner would always be required to disclose if the water system is contaminated, he said.

The uncertainty over the extent of the contamination and the damage it poses extends to Litchfield, an affluent bedroom community near Manchester that is mostly residential but is also home to horse farms, vegetable stands and fields being prepared for planting.

At Thursday’s community meeting, some of the 200 people in attendance peppered state officials with questions.

Matthew McQuesten, who owns a farm in Litchfield, worries all the talk of PFOA contamination could deter people from his business.

“Now that it’s out there, are people going to stop coming to our business because this other business has polluted our soil,” McQuesten said. “That is my concern. I would like a certificate saying that our soil is OK to grow vegetables in and I feel this company should pay for that.”