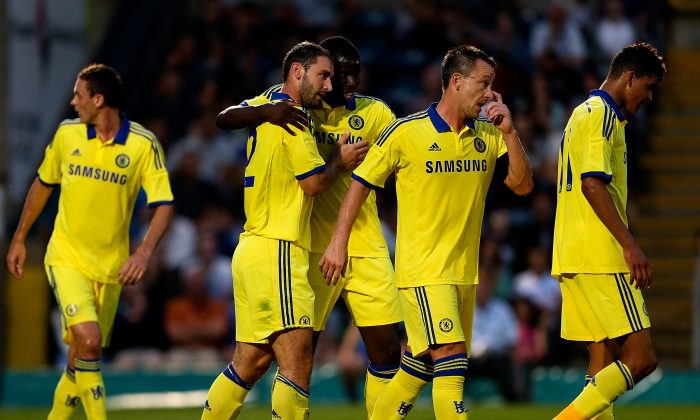 Chelsea and NK Olimpijia Ljubljana are set to face off in a club friendly match on Sunday, July 27.

The game will be broadcast on SportKlub HD Slovenia in Slovenia, GOL T in Spain, Sportklub 1 Croatia and Sportklub HD Croatia in Croatia, beIN Sports 1 HD in Indonesia and Thailand, and NTV+ Football in Russia.

Live stream is available on Gol Stadium, NTV+ Sport Online, and Chelsea TV (for subscribers only).

Chelsea are 1/5 to win the match, while Olimpijia are 16/1 to win, according to OddsChecker.

Chelsea will probably use this pre-season match to gauge how the new additions to his squad will work together.

Blues boss Jose Mourinho has brought in Filipe Luis, Cesc Fabregas, Diego Costa, and Didier Drogba to his squad, and could be adding more.

Not all might start the game though, and newcomer Filipe Luis is well aware of that.

“I leave everything in the hands of Jose,” says Luis to the club’s official website.

“If he thinks I’m ready to play 90 minutes I’m ready but I just want to do my best to help the team win games.”

According to Chelsea TV presenter Gigi Salmon, the players who are guaranteed at least 45 minutes of play time are Diego Costa, Cesar Azpilicueta, Fernando Torres, Gary Cahill, and Cesc Fabregas.

“The team now is predominantly made up of Slovenians, though none currently represent the national team – hardly surprising considering just four players from the Prva Liga, Slovenia’s top flight, were called up to their 23-man international squad for games against Uruguay and Argentina last month.

“In terms of notable players that once graced the green of Olimpija, there are a couple that stand out. Jan Oblak, a goalkeeper, has this summer signed for Atletico Madrid from Benfica for a reported fee of 16 million euros. He was named the best goalkeeper in the Portuguese top flight last season.

“Another is Miran Pavlin. The now retired striker played for the original NK Olimpija and returned there later in his career to help guide the reformed team back into the Prva Liga. Between then he played in Germany and for Porto, at one stage under the guidance of Jose Mourinho.”