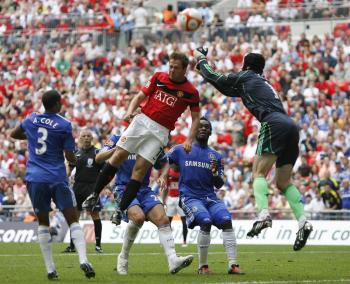 The traditional curtain-raiser to the English Premier League season, the Community Shield, was won by Chelsea in a penalty shoot-out over Manchester United. (Ian Kington/AFP/Getty Images)
Soccer

It’s Chelsea against Man U

Both teams qualified for the knockout stages of the Champions League earlier this week and can now focus their attention 100 percent on each other.

Over the last five years, either Chelsea or Manchester United have taken the Premier League title and in three of those years, the team that didn’t win finished second. So it is reasonably clear that this is now the marquee match-up in the English Premier League.

Chelsea have a two-point advantage over Man U atop the table. Chelsea have the home field advantage and with a red-hot striker in Didier Drogba going against a struggling Rio Ferdinand (or his replacement), the Blues have to be slight favorites to take the encounter.

Other than their draw against Atletico Madrid in Champions League, Chelsea had been on a four-game winning streak. During that streak, the Blues scored 17 goals and conceded none.

Manchester United’s results have not been convincing of late. The Red Devils have not found the form that has led them to three straight Premier League titles yet.

Controversy is sure to come out of this game and don’t be surprised if Sir Alex Ferguson is once again howling at the referees.

Drogba and Chelsea’s diamond midfield formation have the slight edge over a Manchester United team that is still trying to hit their stride.