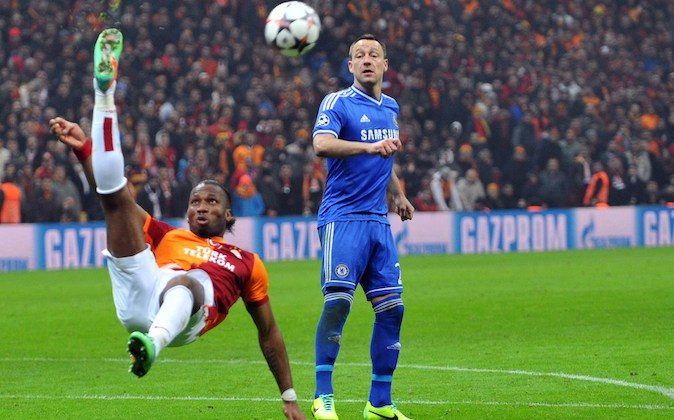 The game will be broadcast on UTV, STV Scotland, and ITV 1 in the United Kingdom.

The game will also air on Star TV in Turkey.

In the United States, the game will be shown on Fox Sports 1 USA.

5 Things to Know About Chelsea-Galatasaray

Chelsea will need to rise above the misty-eyed nostalgia surrounding Didier Drogba’s return to Stamford Bridge as it looks to secure a place in the quarterfinals of the Champions League on Tuesday.

Drogba scored 157 goals in eight trophy-laden years at Chelsea and forever will be remembered for converting the penalty that won the London club the Champions League in the 2012 final against Bayern Munich.

Two years later, though, he will pose the biggest danger to Chelsea as part of a Galatasaray team that is tied at 1-1 with the Premier League leaders after the first leg of the last 16.

Here are five things to know about Tuesday’s match:

It is set to be an emotional night as the Stamford Bridge faithful welcome back one of its favorite sons. And the man himself doesn’t know how he’ll cope.

“First of all, I was happy to play against my ex-club, against my friends. But at the same time it is a very special moment because I do not know what my reaction will be,” the Ivory Coast striker told UEFA.com. “You know that I spent eight years at Chelsea, so I really don’t know, I am quite apprehensive about it.”

Drogba’s return also evokes memories of when Chelsea had a regular scorer of goals up front. This season, strikers Fernando Torres, Samuel Eto’o and Demba Ba have all struggled to find the net, much to manager Jose Mourinho’s frustration.

Mourinho is seeking to become the first manager to win the Champions League with three different clubs but he’ll be surprised if that happens this season.

Despite Chelsea being top of the Premier League by four points and winning its Champions League group, he has persistently claimed this is a transitional season for his developing team.

“It would be fantastic for the evolution of the players, and the team, to play a Real Madrid, Barcelona or Bayern,” Mourinho said.

Galatasaray coach Roberto Mancini’s poor record in the Champions League was one of the primary reasons why he was fired by Manchester City at the end of last season, a year to the day he led it to the Premier League title.

He never got the team out of the group stage, despite having one of the strongest squads in Europe at his disposal, and his tactics were often criticized.

Mancini also failed to progress beyond the quarterfinals of the Champions League in a total of five attempts with Lazio and Inter Milan during his managerial spell in Italy.

Mancini, therefore, has a point to prove when he returns to England — where he still is popular with many City fans for leading the club back to the top of English football.

Having only secured a draw in the first leg, Galatasaray’s best chance of advancing to the quarterfinals may have already gone.

The team’s away record is poor — it picked up just one point from a possible nine on its travels in the group stage and has not won an away game since December in the Turkish league.

“Something has to change. If we don’t start winning away, then it’s 100 percent sure that we won’t be the champions,” Mancini said of his team’s domestic title hopes.

Mancini said the poor away performance would not affect the game against Chelsea.

“That’s a different tournament, I don’t think it will be reflected there,” he said.

Mourinho has a selection poser in midfield, where holding player Nemanja Matic and winger Mohammed Salah are ineligible in Europe due to their participation for other clubs earlier in the competition, and David Luiz is struggling with a groin problem.

With John Obi Mikel having also been a fitness doubt in recent weeks, Mourinho’s only remaining options in that department could be Frank Lampard and Ramires.

Galatasaray played a four-pronged forward line in the first leg and was overrun in the first half before Mancini made changes to reassert some control in midfield.

Yekta Kurtulus could join Felipe Melo and Selcuk Inan in central midfield to keep an eye on Chelsea’s trio of playmakers, which will be three of Eden Hazard, Oscar, Willian and Andre Schuerrle.