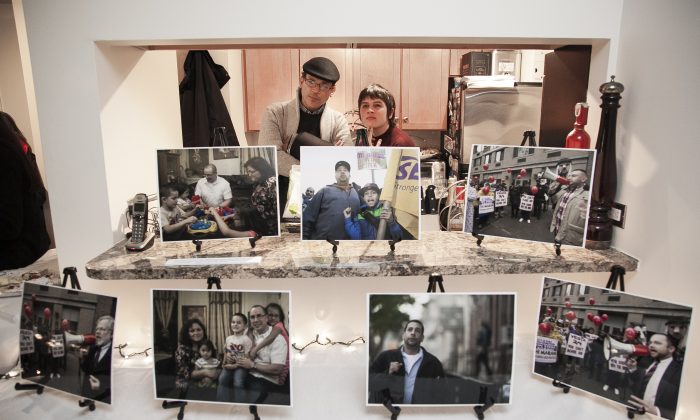 People at a pop-up exhibit on the lives of building workers in Chelsea, hosted at Lowell Kern's apartment at 520 W 23rd Street, on Nov. 18, 2014. (Samira Bouaou/Epoch Times)
New York

NEW YORK—Ten years ago, Manny Vasquez began working at The Marais, a condo-cooperative building located under the High Line park.

Built in 2003 on a ground lease, it was the first development following a 1999 residential rezoning of West Chelsea. It is one of many high-end residential towers that line the edges of the elevated 1.45-mile-long park.

As a concierge, Vasquez helped create a warm and inviting atmosphere, and the residents—interesting, friendly, and open people—felt right at home.

Vasquez said the residents’ comments always stuck with him. Near the beginning, there was one particular interaction with a tenant who lived at a doorman building on the Upper West Side before moving to Chelsea. “He said, ‘I like living here. It feels so relaxed, I feel at home. Before, it was like I was checking in and out of a hotel.'”

Over the years, Vasquez has come to see the building as an extension of home, and cherishes the time he has to interact with the residents. He’s known many children their whole lives, and watched them grow up.

“Everyone stops and says hello, it’s just the nature of the building,” said Lowell Kern, a tenant at The Marais. Kern is a longtime resident of the neighborhood, and moved to the building five years ago to upgrade from a one-bedroom apartment nearby as he was raising two boys.

That realization prompted Kern to host a pop-up exhibition telling the stories of building workers’ lives in his apartment unit. The idea came from service workers union 32BJ, which has been helping workers at The Marais organize. It has been a long process lasting almost two years, but the workers have been unsuccessful because the building’s board is not interested, residents said.

Vasquez came from a working class family and was born and raised in Bushwick, Brooklyn. He now lives in the next neighborhood over, in Ridgewood, Queens.

“I didn’t move far,” he said. He worked a variety of jobs before coming to The Marais, and had learned of the building shortly before it opened through a friend. He was offered a moving gig for an open house showing, and afterward learned the building was hiring. Someone told Vasquez he should try applying for a position, so he did.

He got the job and started working in 2004, but two years later tragedy struck. Vasquez lost his young daughter and her mother in a car accident in 2006.

“It took a lot out of me and still, even now, it’s a part of my life,” Vasquez said. “It’s something that you don’t expect. No one expects that.”

In the beginning, it took all he had just to get up in the mornings some days. At some points, coming to work and seeing the residents every day was all Vasquez had to keep himself going.

It’s not as difficult now, Vasquez said, as he has his faith and family to keep him going. On days off, he spends as much time as he can with his 89-year-old grandmother, and his mother who doesn’t live too far away.

William Rosada, who does maintenance work in the building, will turn 62 years old next year. Before he started working at the building seven years ago, he spent 30 years working at an envelope factory.

“The company’s gone,” Rosada said with a laugh. They made envelopes for companies from retailers to banks, but they are using mail less and less now, he said.

His children are all grown up, Rosada said. His son started living at home recently, he said, and his daughter has a family now in Florida. Rosada, who lives on 95th Street in the city, hopes to retire in a few years.

One of Rosada’s concerns is that he will have to delay his retirement because he does not have a pension. The workers in the building want to unionize so they can have benefits, but the board has been unresponsive, Kern said. He has brought the issue up to the board himself, but they are not interested.

“William deserves to have a pension when he retires,” Kern said. “It’s about decency and fairness.”

Most of the buildings in the area use union workers, but there are a few like The Marais that do not. Vasquez said 10 years ago, when he started, the union approached the workers in his building. There was not a lot of interest in organizing then, and they had not kept in touch with the union.

Eventually some workers wanted to organize, and some did not—for fear of losing their jobs, or because they were offered raises, according to workers. Over the years, some of the workers who did not want to organize left for other jobs.

Early last year, the remaining workers at the building came together and decided they wanted to join a union, signed their papers, and approached 32BJ. Since then, the union has been supporting the workers with organizing efforts like rallies and outreach.

There isn’t much difference in salary as a union worker, Rosada said. He makes $20 per hour now and it wouldn’t be much more with a contract, but he would have health benefits and a pension plan, both of which he needs.

Right now all of his income goes toward bills, so emergencies and doctor’s visits are to be avoided at all costs, Rosada explained.

But he tried delaying a doctor’s visit once, and only ended up sicker than he would have been otherwise. His doctor was very angry, but out of concern for him, Rosada said in good nature. “I have to just not get sick.”

“We want the benefits. It would be 100 percent better,” he said.