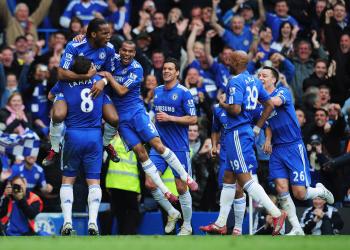 Nicolas Anelka started the rout with Frank Lampard getting the second from the spot after Gary Caldwell was sent off.

From then on the game was out of reach for Wigan. Salomon Kalou got the third and Anelka volleyed in the fourth.

Didier Drogba scored a second-half hat trick, the first with a powerful header, the second from the spot, and a close range tap in for the fourth. Ashley Cole finished it off with a volley.

Going into the match Carlo Ancelotti’s men knew that a win would guarantee the title coming back to Stamford Bridge for the first time since 2006. In his first season in charge he has won the league and now the double is on if they beat Portsmouth in the FA Cup.

Wigan’s task was always going to be uphill when Gary Caldwell fouled Lampard and saw red leaving Wigan with ten men for an hour's play. Drogba wanted to take the resulting penalty but Lampard was up to the challenge much to Drogba dismay.

But as the game unfolded Drogba scored the goal that gets him the Golden Boot for the top scorer of the league by beating Wayne Rooney’s tally by two goals. Chelsea scored over a 100 goals in the season, the last team to do this were Spurs back in 1963. Chelsea scored 103 goals this season putting seven past Sunderland, Aston Villa and Stoke City.

Joe Cole came on once the win was in the bag and it could be his last Premiership game for the Blues given that he still has not agreed to a new contract.