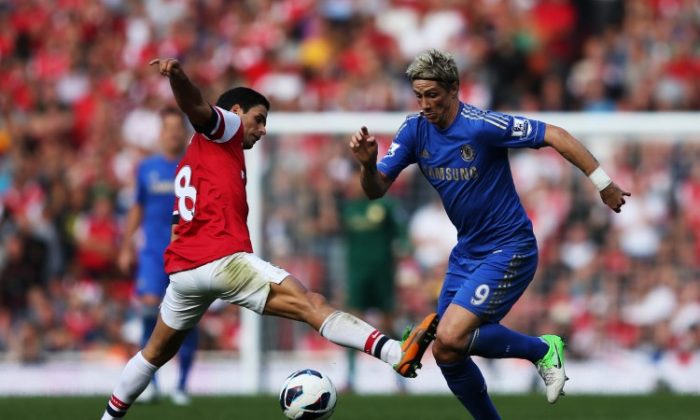 Chelsea in Pole Position After Win at Arsenal

Chelsea solidified its spot atop the Barclays Premier League following a hard fought 2–1 win away to Arsenal in Saturday’s early kickoff.

Fernando Torres put the visitors ahead, but his goal was cancelled out when Gervinho struck an equalizer for Arsenal just before half time. The match was settled by a Juan Mata free kick, which glanced off the knee of Arsenal center back Laurent Koscielny and found its way past second-string keeper Vito Mannone.

“Today was the first big test, Arsenal away, and we got the three points,” Torres said in an interview with ESPN.

Torres, after a dire start to his Chelsea career, has now taken on a great role with the departure of Didier Drogba.

“Everything is in the past now, I’m enjoying the present,” he said.

Koscielny retained his place in the Gunners’ starting line-up, with Per Mertesacker being the one to miss out so that skipper Thomas Vermaelen could return after being sidelined for last week’s visit to Manchester City. Gervinho kept his place, notwithstanding the glaring miss that cost his team a win against City, while Aaron Ramsey was given just his second start of the season.

This meant that England internationals Theo Walcott and Alex Oxlade-Chamberlain would occupy the bench along with underachieving high profile new signing Olivier Giroud.

Skipper John Terry had an eventful week, having been found guilty of racially abusing Queens Park Rangers defender Anton Ferdinand by an FA tribunal, despite having been already cleared of the offense in a court of law.

Terry was banned for four matches and fined £220,000. However the Chelsea stalwart has had many ups and downs, both on and off the field, during his career but never has he given less than one hundred per cent during an actual match.

And again, Terry rose to the occasion against Arsenal in a critical clash between two unbeaten Premier League sides.

It was a cagey start to this London derby in glorious autumn sunshine, with both sides keen to deny the opposing players time and space to exercise their undoubted technical ability.

The first shot on target came from a long range David Luiz free kick, but there was no likelihood of the effort beating Mannone, who would have been grateful for the early touch. At the other end, Abou Diaby shot crisply from the edge of the area, but it was a routine save for Petr Cech.

Just five minutes later the injury prone French midfielder limped off the field to be replaced by Oxlade-Chamberlain. Followers of Arsenal and the French national side will be praying that the knock is not too serious. Diaby has been playing well this campaign and has already made as many appearances this season as he did all last season.

Diaby’s departure necessitated some reorganization on the part of Arsenal, and this allowed Chelsea to take the initiative. With the likes of Eden Hazard, Juan Mata, and Oscar now becoming regulars in the side, the emphasis is more on technical excellence rather than the sheer power that used to steamroll the opposition when the likes of Didier Drogba and Michael Ballack were calling the shots.

Hazard has quickly proved that he is going to be a handful for any defense in European football. At the 20-minute mark, he was hacked down by Vermaelen about 30 yards from the Arsenal goal.

Mata drifted in the free kick with his right foot and found Torres on the far side of the 6-yard box. The Spanish striker cleverly hooked the ball around Koscielny on the volley and Chelsea were one up.

Arsenal’s defense had been solid through five games this season, but on this occasion, Koscielny was poorly positioned and Oxlade-Chamberlain was left trying to mark the much bigger Luiz.

The goal certainly opened the game up, which was just what the doctor ordered as far as the 60,101 spectators were concerned. Arsenal went looking to get back on level terms and did so just two minutes before the break.

Mikel Arteta sent Oxlade-Chamberlain away down the right. Looking up, the England youngster spotted Gervinho and crossed along the ground, right through former Arsenal defender Ashley Cole. The Ivorian controlled with one touch, turned smartly and rifled the ball into the roof of the Chelsea net.

The second period was only eight minutes old when the visitors again took the lead.
It all started once again from a professional foul by the Arsenal skipper. This time his victim was Torres and Vermaelen received a yellow card for his trouble.

The offence was committed a similar distance from goal but this time to the right rather than the left of center. Mata again took responsibility for delivery into the box.

His left footer beat everyone with the exception of Laurent Koscielny who just got a knee to the ball and helped it past Mannone.

Arsene Wenger’s team worked hard to try and fashion an equalizer but were frankly below par in the final third. Nonetheless, they did create three or four good chances and really should have converted at least one of them to earn the point.

Just six minutes after Chelsea’s go-ahead goal, Kieran Gibbs chipped the ball nicely into the area for Lukas Podolski, but the German’s accurate header brought the best out of Cech who managed to turn it wide of the post.

At the 79-minute mark, an attempt by substitute Giroud took a big deflection off Luiz and although Cech found himself moving away from the ball, managed to get one of those big hands to it and somehow push it wide.

Four minutes from the end of normal time Koscielny hit the post with a header from Santi Cazorla’s free kick, but the best chance of all fell to Olivier Giroud in stoppage time.

The out of form French striker finally opened his Arsenal account in the League Cup in midweek and had an opportunity here to make a name for himself in an Arsenal shirt. Following a surge forward by Oxlade-Chamberlain, Giroud was put through on the left side of the area but hit the side netting after rounding Cech.

Arsenal have lost for the first time this season, but still appear to be in much better shape than they did this time last year. The loss of Diaby was a severe blow for Wenger in this game and of the three Arsenal substitutes, only Oxlade-Chamberlain really looked the part with both Theo Walcott and Giroud conspicuously failing to influence the final result of the match.

“I feel we played against a good team, but we gave the game away,” Wenger said on arsenal.com. “They had three shots on target and scored two goals, from soft set-pieces.

“Defensively we were just not at the level you have to be in a game like that, which is where we were punished today.”

This was a thoroughly professional performance by the European champions who can now prepare for Champions League action knowing they’re at the top of the tree going into the next round of Premier League games.